All cities have vacant sites – they are part of the process of change. But Christchurch has more than its fair share. Where neglected, vacant land can undermine investment and detracts from our aim to make Ōtautahi-Christchurch a great place to be.

What we do, and why

Vacant sites are areas of land that have been cleared and lie unused or are in temporary use as a stepping stone to permanent development.

In places where vacant land is concentrated and neglected, this influences perceptions and undermines the enjoyment of what our city offers.

Presenting our city in a better way will attract more people, more often.  This will increase investor interest and development demand for vacant sites.

Our Vacant Sites Programme aims to:

Why does Christchurch still have so many vacant sites?

Following the earthquakes of 2010 and 2011, thousands of buildings were demolished across Christchurch.  This left our city with a significant legacy of vacant sites – especially in Central City.

New buildings now occupy many of these sites, but we know that cleared land will remain a feature of Ōtautahi-Christchurch for years to come.

In Central City this is particularly apparent because:

These factors, as well as the owner's own circumstances, influence decisions about new development. 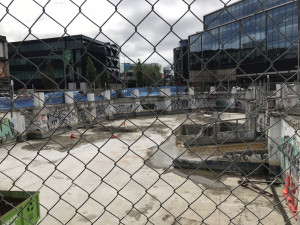 Both.  Vacant sites provide Christchurch with great opportunities for development to meet the city’s future growth needs.  But while they remain undeveloped, and particularly where they are unmanaged, they maintain visual reminders of the earthquake period, clouding perceptions of the new Ōtautahi-Christchurch and what it has to offer.

Vacant sites are a visual reminder of the earthquakes and reinforce misconceptions that our city remains broken. This can make people reluctant to visit, which in turn undermines investor confidence and deters commercial tenants and potential homebuyers. 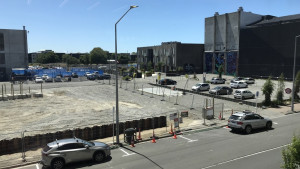 Businesses, resident and visitor surveys consistently convey negative perceptions and effects of vacant land in the heart of the Central City.

With its function as a key employment and business centre, and a destination for retail, entertainment, and cultural and tourism activities our programme is focused heavily on this area.

The adjacent map (expanded version [PDF, 220 KB]) shows the areas we want to prioritise.  The areas reflect the prominence of the sites, their proximity to public destinations and areas where new investment is in the pipeline. 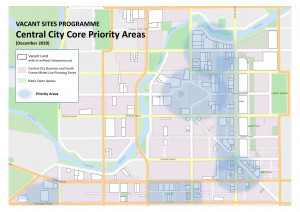 While most energy will be directed towards these areas, other sites which significantly detract from the city experience or prominent sites which offer really great opportunities for activation projects/uses will also be investigated. The willingness of site owners will also be an important consideration.

In the surrounding residential communities of the Central City, the Central City Residential Programme - Project 8011 will use its neighbourhood planning workstream and tools in this programme to support the development and prioritise any site improvement.

Outside of the Central City vacant land is less prevalent, but hotspots in some suburban centres exist including New Brighton, Lyttelton, Linwood Village and Sydenham.  The best advice is to get in touch.  Where sites are creating a nuisance and seriously impacting upon the adjacent property you may want to report this(external link) for action to be taken.

Progress is being made 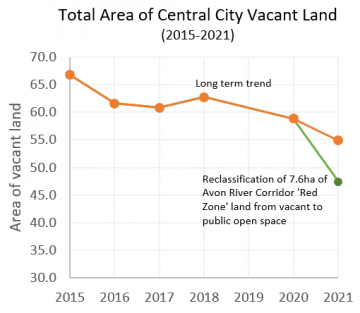 After the earthquakes, there were more than 65 hectares of cleared land in Central City. By September 2021, this had fallen to just over 47 hectares. For context, Cranmer and Latimer Squares are each about 2 hectares.

Excluding the change noted in the graphic, the amount of vacant central city land was reduced by 3.9 hectares.  This is the largest annual reduction since 2016 when parts of the retail precinct and the Bus Interchange were completed.

This map shows the distribution of vacant sites [PDF, 284 KB] (not including sites under construction).

Recent changes in the use of vacant land are summarised in this graphic. Key changes include:

Information for owners of vacant sites

We’re keen to connect with site owners, to understand where you’re at in developing your site.  We can put you in touch with people who can help you make progress, whether with a permanent development or with improvements and/or temporary use.

You can update us on what you are doing via the Contact form below.

Getting ready to develop?

We provide a range of services and support to developers, including

Find out more information on how we can help you through the development process.

Own a site, but still considering your development options? 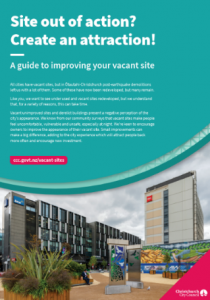 If your site is unimproved and/or within the priority locations identified in the section above, we’ll be getting in touch. We want to understand what your development plans are or what is holding you back from developing your site.

If you are not in a position to start developing your land, it’s important that you take steps to improve the appearance and upkeep of your site.

A great starting point is to download our vacant site improvement guide [PDF, 2.3 MB] which sets out some expectations of basic standards we expect of a site. It includes information about how we can support you to bring your site to life through an activation project.

Take a look at examples of previous activation projects we have supported.

Why was this introduced? 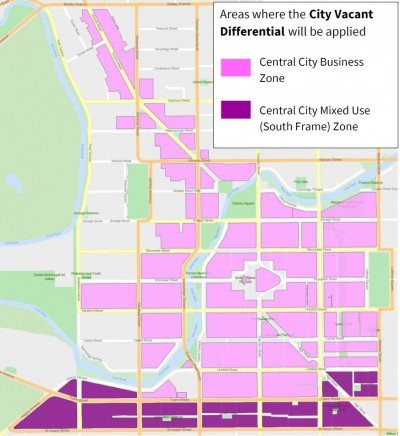 Vacant land in the Business and Central City Mixed Use South Frame Zones (shown on the adjacent map) benefits significantly from our general activities (being activities funded by the general rate). Enhanced roads and footpaths, public spaces, parks and recreation and facilities, libraries, art galleries, events and promotion, etc. enhance the attractiveness of Central City land as a place for development.  Our infrastructure has been planned to cope with potential developments on vacant land.

However, vacant land, by its nature, has a lower capital value, since no improvements have been made to the land. Consequently, the general rates set on vacant land are low. We consider that the benefits that owners of vacant Central City land receive from our general activities are substantially above the rates currently being assessed on that land.

A further problem is that vacant Central City land is often left in an untidy condition. Large gravel car parks and poorly maintained unused land can look uninviting to pedestrians and can be considered dark and unsafe at night time. The visual appearance of vacant sites has a significant influence on negative perceptions of central Christchurch – and this perception is deterring people from the Central City and discouraging new investment on nearby sites. We would like to see vacant sites developed, or at least presented in a way that supports a vibrant, lively inner-city environment.

Over the last 3 years we’ve reached out to owners through the Vacant Sites Programme which connects owners to sources of support for new development projects.  Not all owners are ready to commit to a project, so the programme also provides guidance and project support to owners to deliver interim, simple and cost effective improvements.

The Council consulted on the issue of vacant land as part of the Long Term Plan 2021 –31.  Submissions made at that time indicated strong support for action to improve the visual appearance of vacant Central City land.  Following careful consideration the Council voted to introduce a new “City Vacant” differential for the general rate from 1 July 2022.

The excluded uses – while not currently making best use of land – contribute to the economic wellbeing and functioning of the surroundings).

Alongside the “City Vacant” differential, the Council has also introduced a new rates remission* for vacant land that pays the new City Vacant differential but which is being kept in an improved and maintained state, consistent with our Vacant Sites Improvement Guide [PDF, 2.3 MB].  This remission seeks to incentivise site upkeep that adds to, rather than detracts from, the city experience. The remission will be discretionary, based on compliance with the guidelines.

Information about the City Vacant Differential and Remission can be found on pages 30 and 76 of the 2022/23 Annual Plan(external link).

*The amount of rates remitted would be the amount that restores the land to the same rating position it would have been in if the City Vacant differential was not applied to the land.

How are vacant sites assessed?

For rating purposes, the state of a vacant site during final inspections held in June each year will determine its liability or exemption from the City Vacant Differential in the next financial year which commences on 1 July.

The assessment will also determine whether site improvements made qualify the site for the rates remission.

Each year, between February and April, all vacant sites are provisionally reviewed.  Reviews check on the current consented status of uses, and involve a visual inspection where the site is photographed.

Specifically the review will consider,

Where, after first inspection (normally completed in March) a site is deemed liable, owners will be written to (normally by 30 April) highlighting the current reason(s) for that assessment.  This may allow time for remedial action to be taken by the owner. Note: remedial action does not include the process of securing/renewing a resource consent which may take longer).

Final surveys in June will take a final view on the site’s rating status and update photographic records. Council staff will track projects and consent applications in progress right up to 30 June as required.

If you have any questions or would like to discuss opportunities to improve or develop your site, contact us at urbanregeneration@ccc.govt.nz or by using the form below. We will respond to all enquiries within five working days.