Share an idea was a conversation with our community to gather ideas on how they wanted their Central City redeveloped following the devastating February 2011 earthquake. 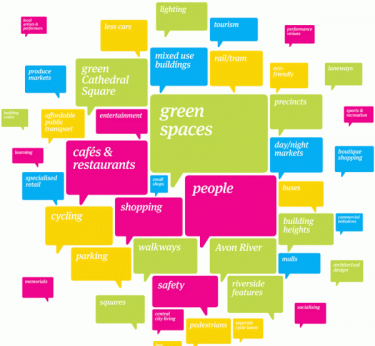 Share an Idea was a way for the public to tell us their ideas about how the Central City should be redeveloped to be a great place again.

For six weeks in 2011, we gathered people’s ideas for Central City.

These ideas were brought together to help inform the draft Central City Plan as a broadly agreed structure and direction for the Central City.

In total there were more than 100 meetings involving 1000 people, and more than 106,000 ideas received from our community.

These ideas are reflected in the Central City Plan.

Share an Idea, was the “unanimous overall winner” of the 2012 Co-creation Award. The awards recognise and celebrate the most original and successful co-creation initiatives.