Walk the long broad paths or relax with a picnic amongst our ancient trees. One of the Gardens’ favourite outdoor ‘rooms’, the great Archery Lawn is named for its use in the 1880s by the local archery club. This avenue of lime or linden trees (Tilia europaea) was established in 1917 and named for Henry Joseph Beswick, a former Chairman of the Christchurch Domains Board and Mayor of Christchurch in 1896.

Beswick’s Walk is undoubtedly one of the Gardens most stunning experiences. Throughout the autumn, the leaves of the majestic lime trees turn a bright golden-yellow before gently falling to form a magical golden carpet. During mid-summer when the lime trees are in full flower, their scent hangs heavily in the warm air attracting a myriad of bees. 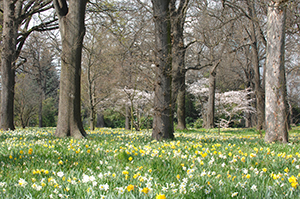 The Daffodil Woodland extends over two hectares on the south-west side of the Avon River in Hagley Park.

Between 1864 and 1930, the Canterbury Horticultural and Acclimatisation Society leased part of the woodland, keeping a menagerie of unusual animals here including silk worms, deer, ferrets, kangaroos, angora and cashmere goats, opossums, monkeys, wallabies, llamas, a lemur, a tortoise, a Californian bear and even an emu called Jack. Enjoyed by many people, this popular area was known for a while as The Zoo.

In 1933, Park Curator James McPherson, initiated the planting of daffodils among the established oak and ash trees. In the first year, 16,000 bulbs were publically donated and planted. By 1943, 500,000 bulbs had been planted and these provide the basis of what is today one of the most popular springtime attractions in New Zealand. 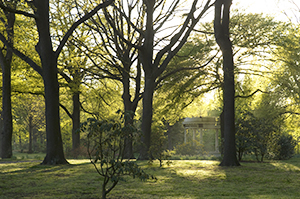 This area of two hectares extends in a westerly direction from the Primula Garden and was named after Mr R. J. S. Harman, an executive committee member of the Christchurch Domains Board.

The established plantings include many fine specimens of ash (Fraxinus), hornbeam (Carpinus), oak (Quercus) and sycamore (Acer). These wonderful trees are much admired for the cool shade they provide in summer and their attractive autumn colours. 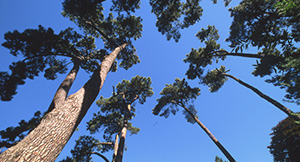 Visitors entering the Gardens via Rolleston Avenue entrance will notice at the far end of the Armstrong lawn a fine group of maritime pines or Pinus pinaster.

Elevated on a naturally occurring sand dune, the circle of pines form a striking feature on what is now called the Pine Mound. 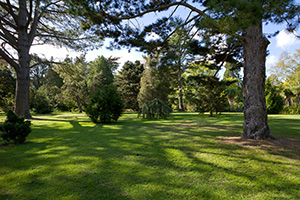 The establishment of the Pinetum began prior to World War II. The southern section however, remained the refuse dump for the Botanic Gardens until 1961, when it was cleared and planted with conifers.

Conifers are an attractive and economically important group of plants, the majority of which are evergreen with predominantly narrow needle like leaves.

The Pinetum has matured to include an extensive collection which includes many species and cultivars of cedar, cypress (Cupressus), fir (Abies), larch (Larix), juniper (Juniperus), pine (Pinus) and spruce (Picea). 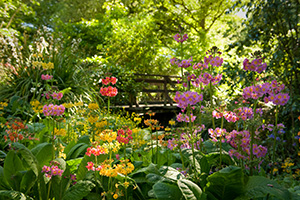 The Woodland Garden was developed in 1955 using a small stream as a centrepiece.

A selection of small trees and large shrubs provide just the right semi-shaded conditions to support an extensive collection of colourful primulas. They grow happily in association with groupings of many other interesting, moisture loving plants.