Christchurch is a beautiful planned city with access to the river and surrounding parks. Now it is time to understand the true value of the city's great potential as an attractive living city for the 21st Century.

In 2009, Danish urban designer Jan Gehl lead a study of central Christchurch called "Public Space, Public Life".  Similar studies have been undertaken in a number of the world's greatest cities.

A series of recommendations were provided which informed the Council's 'A City for People Action Plan' to transform the central city. This study and the action plan provided valuable data and a foundation for development of recovery plans following the earthquakes, with many actions remaining relevant to achieve a vibrant and prosperous central city.

The study suggested to create:

A City for People 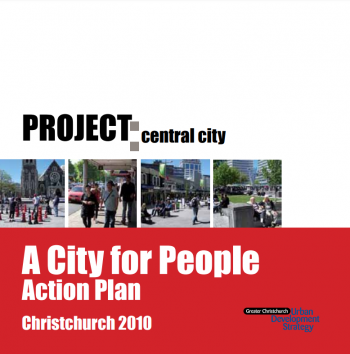 A City for People is the action plan for the implementation of the Public Space Public Life Study undertaken in 2009.

A 12-year programme of activities to create a Central City which is vibrant, safe, attractive and where people want to spend their time. The intention was to link the actions to three-yearly reviews of the Council's Long Term Plan.