We're proposing some changes to the Ilam / Middleton / Riccarton intersection to make our roads and footpaths safer for drivers, cyclists and pedestrians. We're keen to hear your thoughts on how we can improve what's proposed.

Work to improve the intersection of Middleton Road, Riccarton Road and Ilam Road – in tandem with building the Nor’West Arc cycleway – starts this month.

The intersection of Middleton Road, Riccarton Road and Ilam Road – ranked the seventh most dangerous in Christchurch – will be upgraded to improve safety for motorists, cyclists and pedestrians.

On 12 June, the Council decided to approve the staff recommendation, which is the proposal as originally consulted, including the following changes:

The Council made no further changes to the proposal, as explained in this Newsline article(external link).

Council members spent some time considering the project and the Community Board’s amendment to the proposal. The majority then agreed that the improvements to the level of safety for all road users provided by the staff proposal is the main priority at this problematic intersection.

One hundred and thirty seven individuals or groups provided written comment on this proposal.

You can view the

Making our roads and footpaths safer for drivers, cyclists and pedestrians

The llam / Middleton / Riccarton intersection is one of the ten most dangerous in Christchurch. It is well known as difficult to negotiate because of the off-set alignment of these three busy roads.

The existing traffic layout on Riccarton Road causes particular issues for pedestrians, confusion for through and right turning drivers, and conflict between drivers turning right into Ilam Road and those travelling straight ahead in the opposite direction. As a result, there have been many crashes – some of them very serious.

Our traffic engineers looked at 16 different options to reduce the number of serious injuries at this intersection, and reduce the number of crashes involving pedestrians and cyclists. We also considered how we could best maintain network efficiency for public transport along Riccarton Road and, thinking ahead, how we could integrate with two future projects: the Nor'West Arc Major Cycleway and the next stage of Riccarton Road bus priority. Because of the constraints of this area, the analysis and modelling has shown that only one of the 16 options benefits all road users – general traffic, pedestrians, cyclists using the Nor’west Arc cycleway, and bus users. 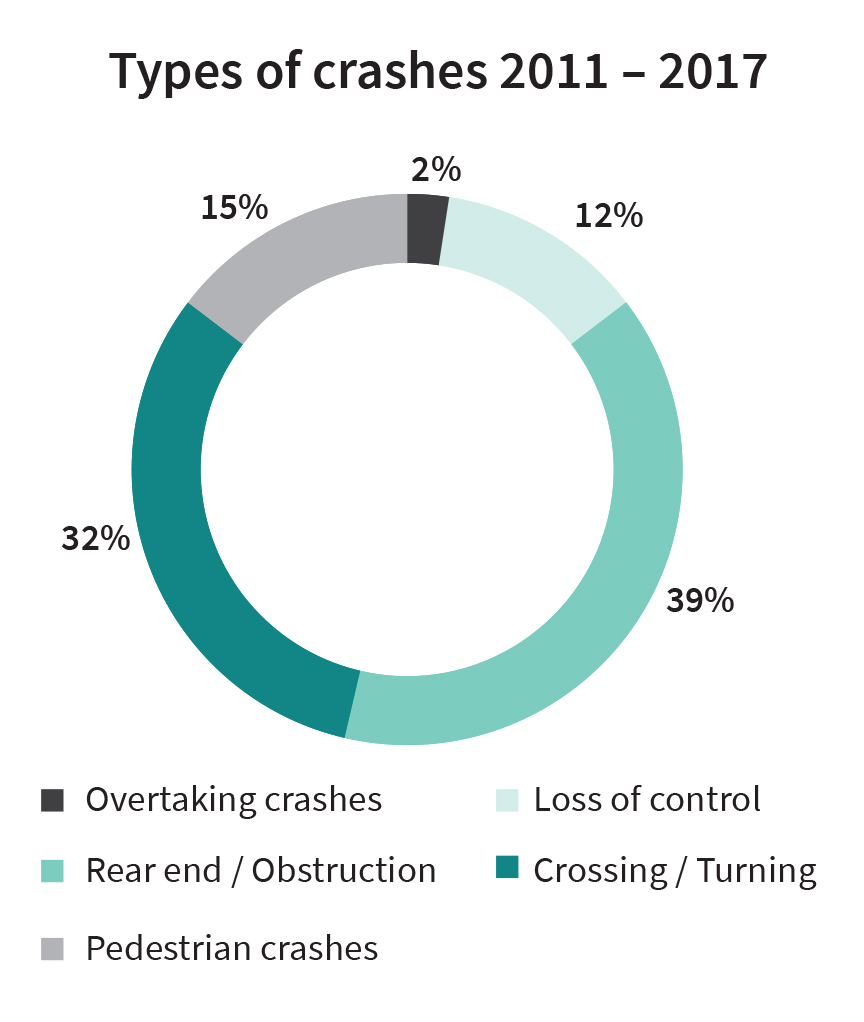 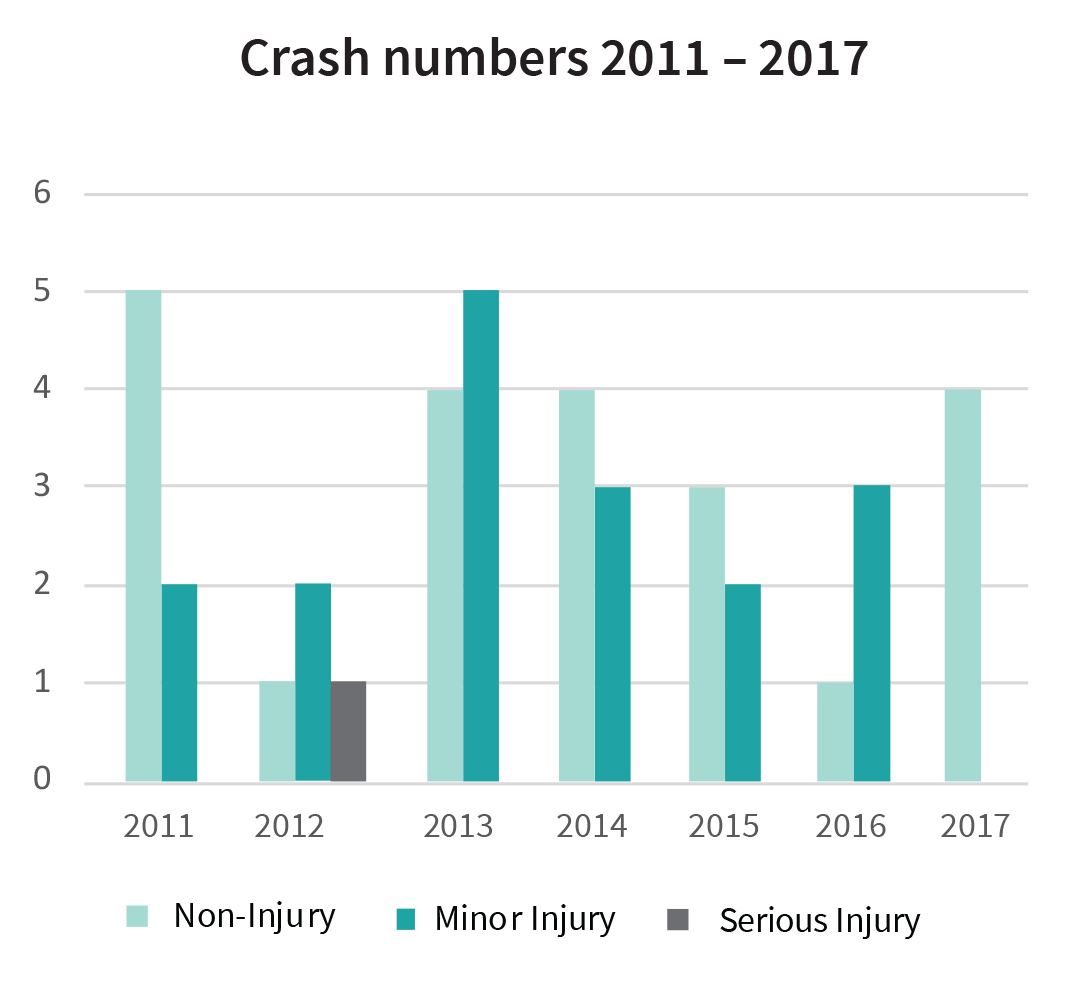 To make sure the proposed safety improvements are effective, and to keep the traffic flowing along Riccarton Road, we also need to make changes to other intersections in the area.

We are proposing some vehicle access restrictions to and from Riccarton Road from Middleton Road and from Field Terrace. These changes work together to keep things moving along that stretch of road – if we only make changes to Ilam / Middleton / Riccarton intersection we’ll be impacting on how traffic in general flows, and specifically on how the buses travel. We also need to make some changes to lane lay-out and length near the Clyde/ Wharenui / Riccarton and the Hansons/ Riccarton Waimairi intersections, as well as Ilam/ Riccarton.

The intersections include facilities for the NorWest Arc Major Cycle Route that extends from Cashmere to Papanui.

All Major Cycleways are designed to cater for people on bikes aged between 8 and 80 years. This proposal meets these requirements including: 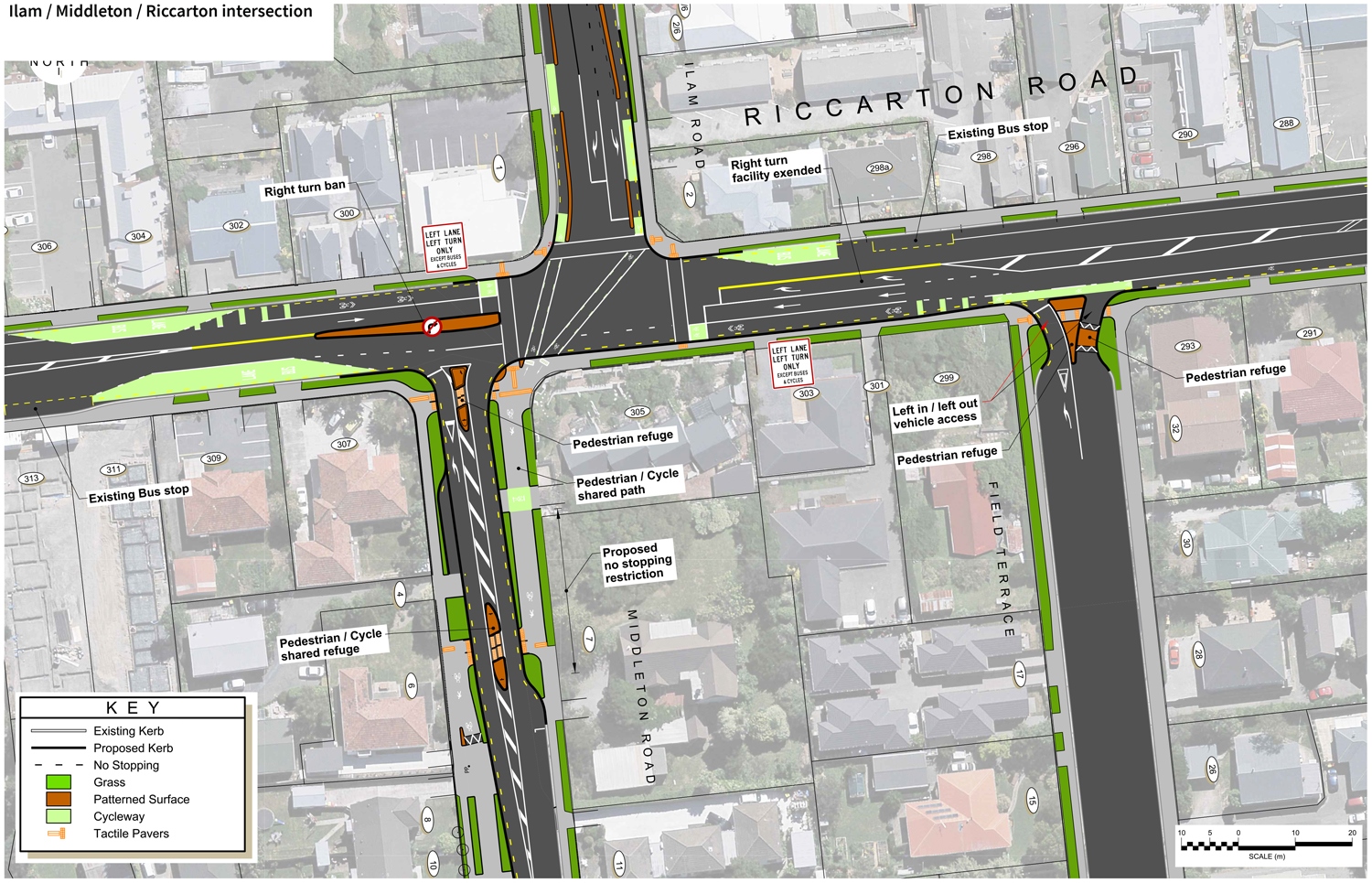 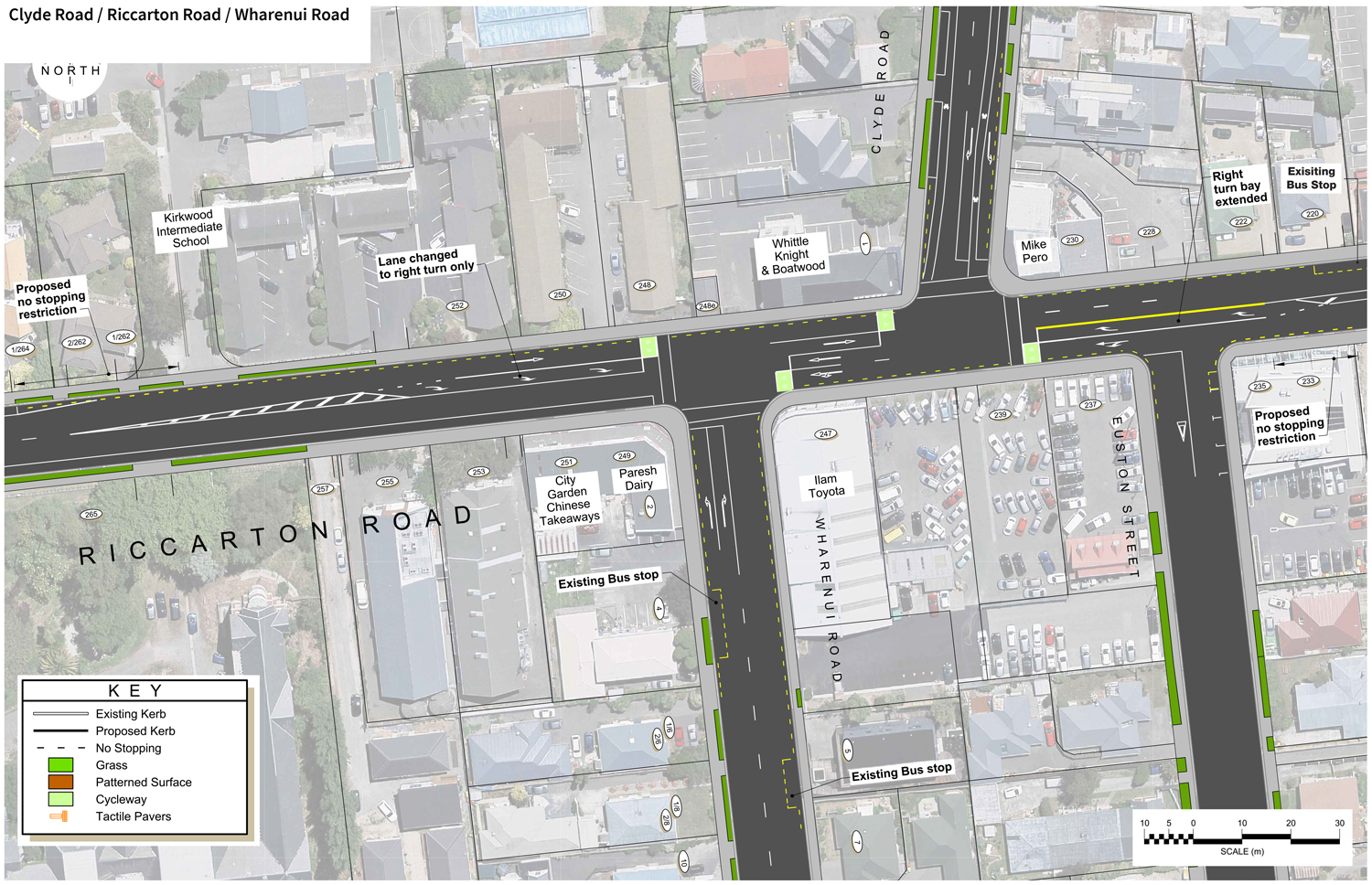 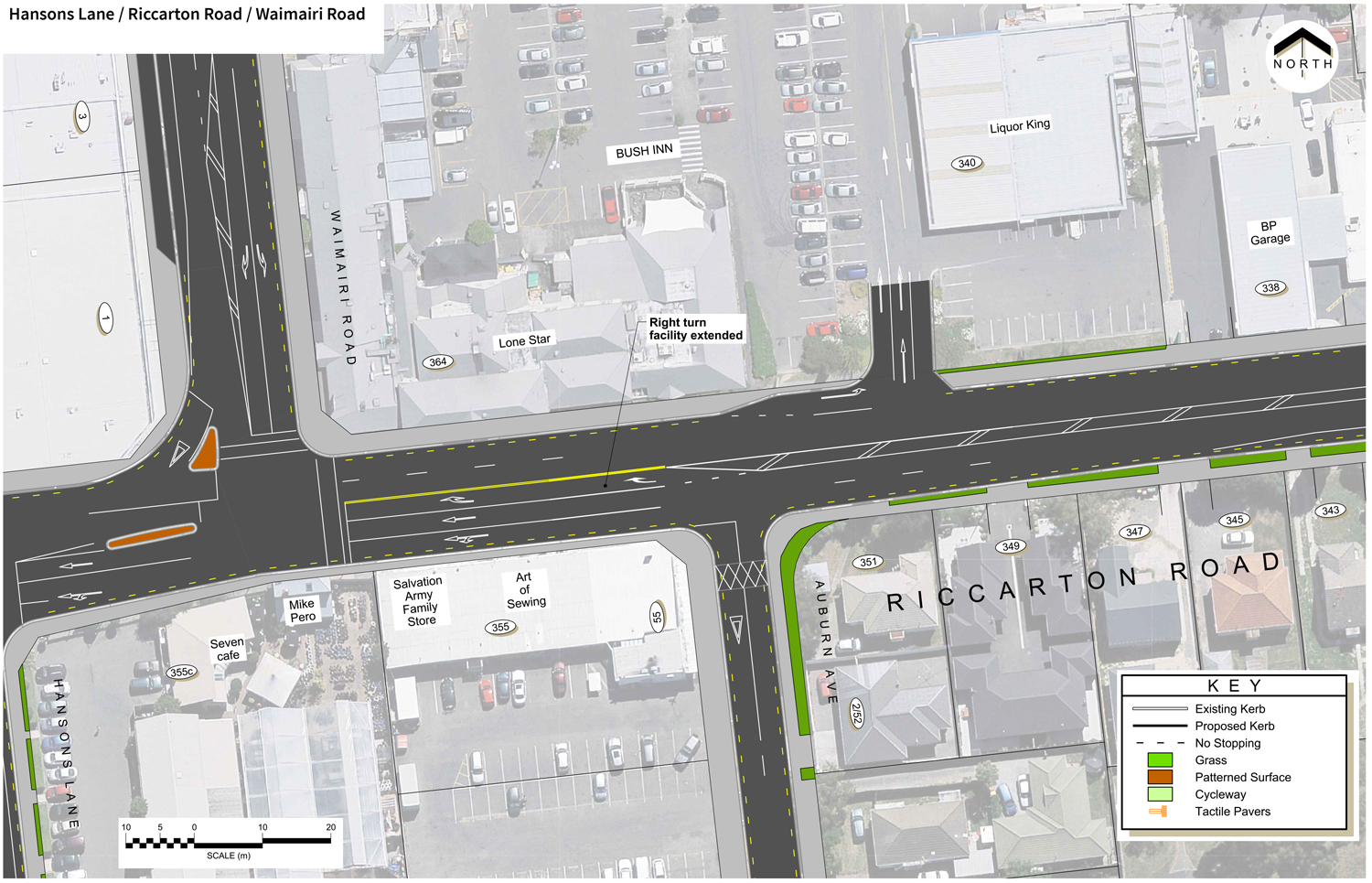 When we consulted on the Nor'west Arc Major Cycleway we didn’t include plans for what would happen in the Ilam / Middleton / Riccarton intersection. This is because we knew further work was required to ensure the plans for this intersection took into consideration benefits for and safety of all road users. 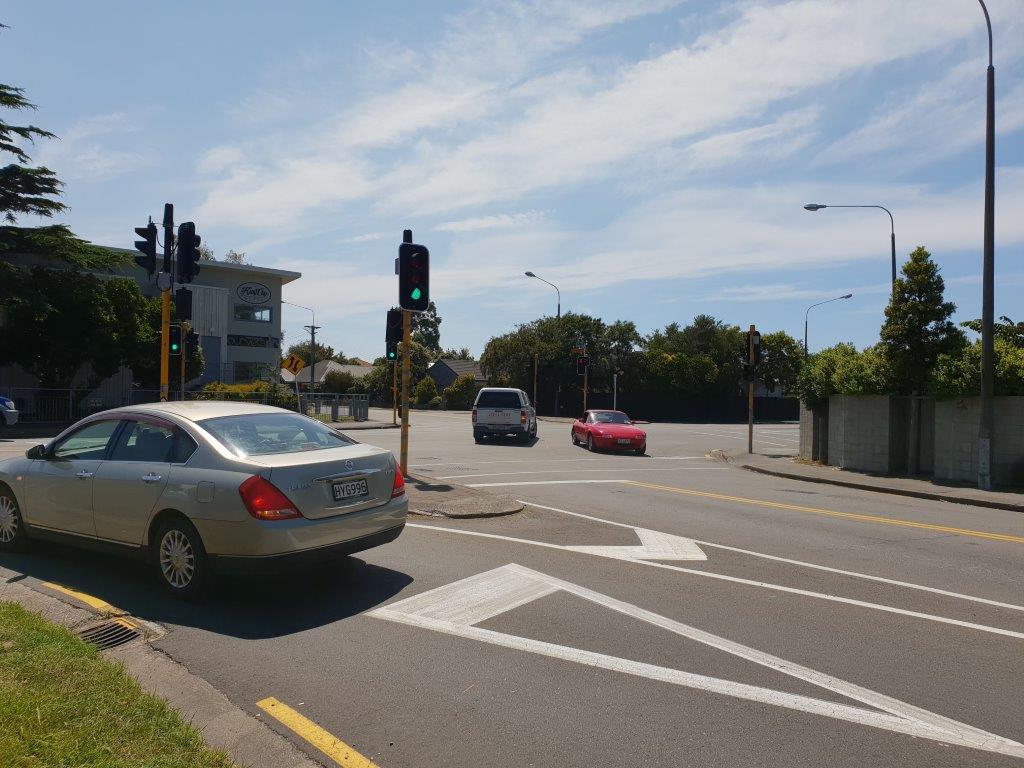 Existing footpath at the corner of Ilam and Riccarton Road 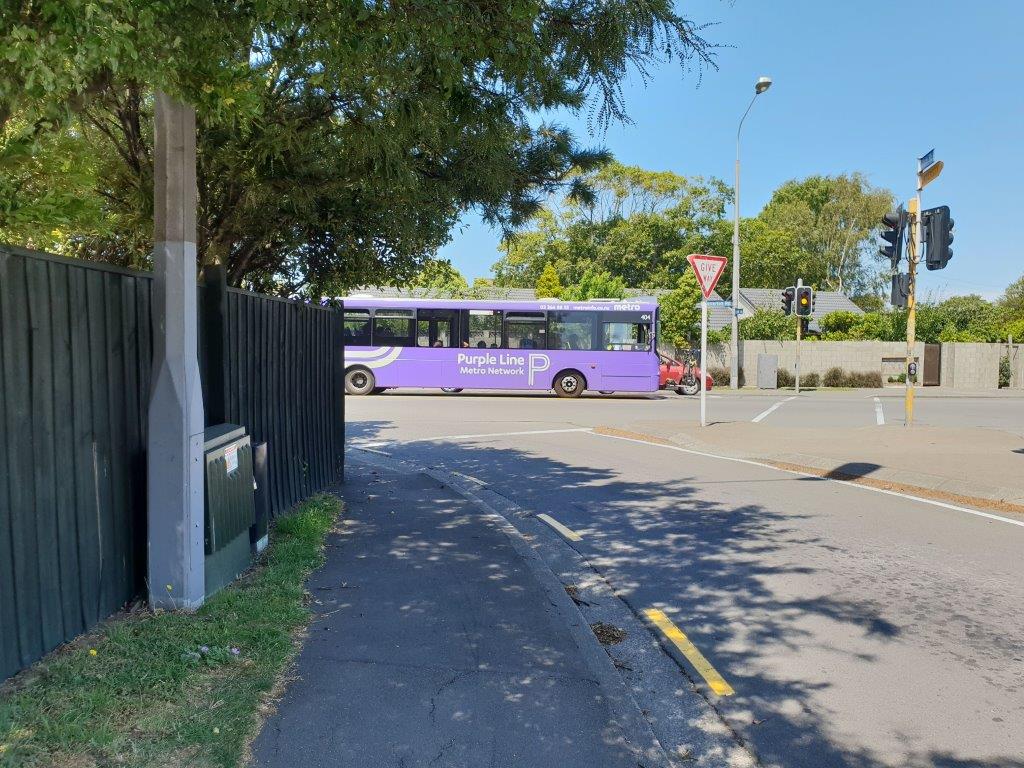 Existing layout at the Ilam/Middleton/Riccarton intersection

Information sessions
Come talk to us about the proposal

There is parking behind the building