We are proposing to make some improvements to Naval Point and we’d like to receive your feedback.

Consultation on the Naval Point development options has now closed. People were able to provide feedback from 27 June to 28 July 2019. During this time we heard from 307 individuals and groups. The table of consultation feedback [PDF, 639 KB] is now available.

A summary of the most common feedback [PDF, 509 KB] themes arising.

Staff will present the consultation results to Te Pātataka o Rākaihautū/Banks Peninsula Community Board. Due to this being an election year where 5 of the 8 current Community Board members are not re-standing the information will be presented after the new Community Board members are elected.  Staff will continue with further investigations relating to Naval Point and we hope to send out an update before Christmas. Staff may contact stakeholder groups directly during this time for more information. Our goal is to produce a Development Plan for formal consultation early to mid 2020. The information you have provided to us during the early consultation phase will help us prepare this.

The Council is proposing to make some improvements to Naval Point. We’d like your feedback on options proposed that will help make Naval Point a water-focused public space with access to Whakaraupō/Lyttelton Harbour, that everyone can enjoy, while also improving existing onsite recreational assets. Naval Point is an important marine and recreational asset for Lyttelton and the region and includes one of the few all tide water access points for Christchurch. The area is also one of the only flat recreation areas in and around Whakaraupō/Lyttelton and acts as a natural draw for the public.

Minimal work has been carried out to the wider Naval Point area in recent years, but it has been identified as one the Council wishes to improve and develop. Funding was made available through the 2018 – 2028 Long Term Plan for a Naval Point Development Plan.

We are proposing two options for the site, which have been developed following discussions with key stakeholders and site research carried out over the last four years.

Once we have a preferred option we will then be able to start more detailed planning and costings for the development of Naval Point, which will go out for further public consultation in 2020.

We want to make Naval Point a water-focused public space providing access to Whakaraupo/Lyttelton Harbour for everyone to enjoy, while also improving existing onsite recreational assets.

Benefits of developing the area will include:

The need for a Naval Point Development Plan was first identified through the Lyttelton Master Plan 2012 and again in the Lyttelton Port Recovery Plan 2015.

Community consultation was carried out in 2017 and 2018 through drop-in sessions, site surveys, previous Have Your Say consultation and discussions with user groups. A series of background reports have also been carried out on Naval Point in recent years, assessing the area for things such as cultural values, risks, archaeological significance and how it fits into the greater plan for sport in Greater Christchurch.

The two options being proposed in this consultation have been developed based on the previous background work carried out, as well as more recent work with: Te Hapū o Ngāti Wheke, mana whenua for the area; users of the site; and other key stakeholders. These stakeholders include sports clubs, Naval Point Club, the Harbourmaster, the Lyttelton Port Company and the Coast Guard.

We thank all those who have helped inform the options and look forward to receiving feedback from these groups, and the wider community, as we start the exciting development of Naval Point.

Both options will improve boating and general public safety at Naval Point and make it more accessible to the wider community.

Option Two proposes Council acquiring a 1.2 hectare piece of land, which would give the site better configuration for development.

Common elements in both options include:

This option is based on development of the site in its current configuration and does not require Council to acquire additional land.

Elements specific to Option 1 include: 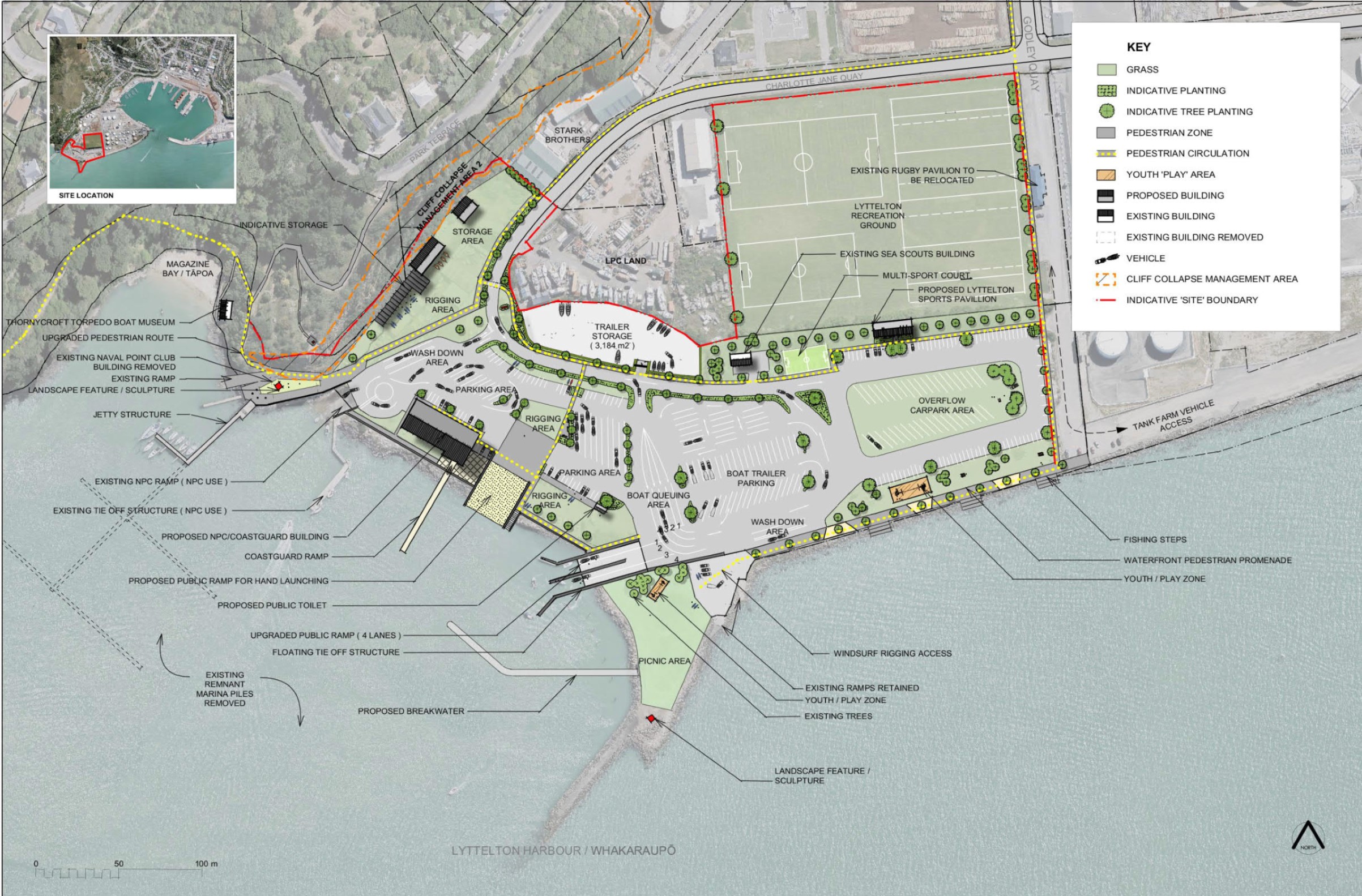 This option is based on Council acquiring 1.2 hectares of additional land, which would give the site better configuration for development.

Elements specific to Option Two include: 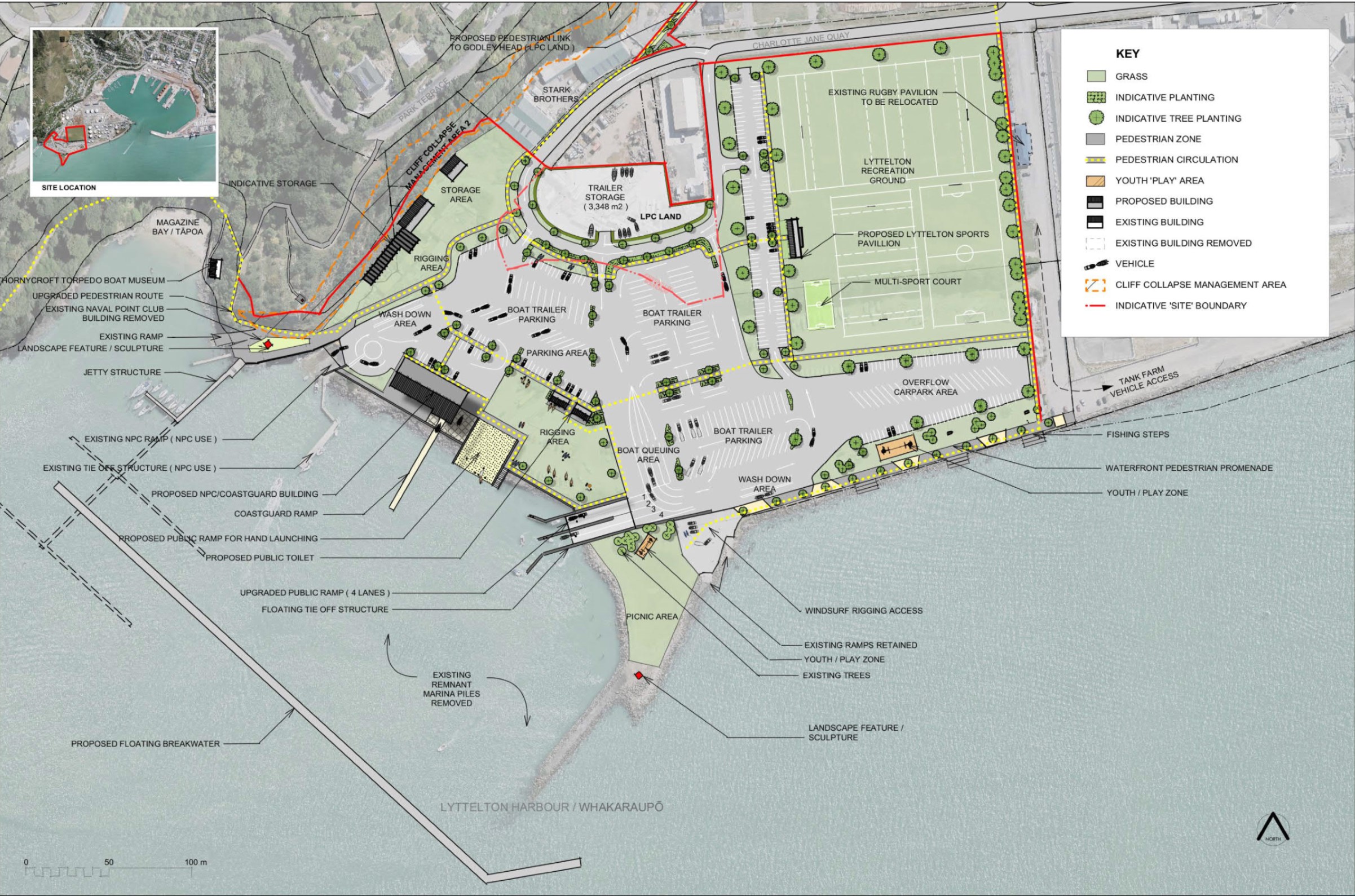 The development of Naval Point has been identified as an important and significant investment for the Council over many years.

Funding of $10.65M has been set aside for the project through the 2018 – 2028 Long Term Plan. This will cover a portion of the costs required to fulfil the long-term vision for the area, with additional funding to be sought in future Long Term Plans as the project is completed in phases.

Both options outlined will require significant funding, although option two will be the most expensive due to the costs associated with the extended floating breakwater, rotation of the sports fields and addition of roading infrastructure.

More detailed costings, including operational costs, will be made once Council have a preferred option to work with. These will be formalised in the Naval Point Development Plan and shared with the public through future public consultation.

Whakaraupō/Lyttelton Harbour is within Te Pātaka o Rākaihautū/Banks Peninsula and is historically significant to mana whenua and Aotearoa/New Zealand. We have worked closely with Te Hapū o Ngāti Wheke to develop these options, as Naval Point and the Magazine Bay Marina fall within the ancestral lands and thetakiwā of Ngāti Wheke.

Research previously prepared for the site identified the significance of the coastline, including individual sections around the wider Naval Point area such as Cliff Cove, Magazine Bay and Dampier Bay, as being used as waka landing sites. This coastline is within a Ngā Tūranga Tūpuna area.

Ngāti Wheke require that any proposed activity has no adverse impact on both cultural values and, on, or into, the coastal marine waters and environment. They also ask, that where possible, improvements to the coastal marine area should be undertaken.

Staff are working with Ngāti Wheke on a Māori name for the site, which will be shared with the public once confirmed.

Option Two would result in Christchurch City Council considering options to acquire an additional 1.2 hectares of land, which would ultimately make the site safer and more accessible.

If Council was successful in acquiring the land, it would improve accessibility to Naval Point with the addition of a secondary access to the site.  It would also create a better configuration of land to support marine as well as recreational activities on the site, as well as allowing for pedestrian access along the former rail corridor.to users and the wider public. As part of this work Council would explore whether the cost of the additional land could be offset by disposing of some of its land in the vicinity.options to acquire an additional 1.2 hectares of land, which would ultimately make the site safer and more accessible.

Acquiring the land would be an independent process from this consultation.

The two options that are being proposed for the development of Naval Point do not include the Magazine Bay Marina. Photo of the marina at Naval Point

This has been based on:

The options propose retaining a small portion of the marina as a jetty for public use. However, the long-term future of the marina is a Council decision and will be presented to elected members following consultation with the public and feedback from the Banks Peninsula Community Board.

Necessary structural repair works are underway during 2019 to a finger of the marina, which will allow current berth holders to remain in Magazine Bay until a final decision is made by Council. There is currently no specific time frame associated with the proposed removal of the marina and how the retained portion of the structure could be utilised for better public accessibility in the future.

You are able to give feedback on the future of the marina as part of this consultation process. This feedback will be included in recommendations that will go to Council for a final decision on the marina.

It is hoped the Draft Naval Point Development Plan, which will go into much more detail than these option plans, will be ready for public consultation mid 2020.

Ongoing updates will be posted on the Naval Point page