A major Government-led reform of New Zealand's drinking water, wastewater and stormwater services (the 'three waters') is under way. We're working through understanding what it could mean for our community.

Why is water reform happening?

At the moment, New Zealand's drinking water, wastewater and stormwater (the 'three waters') services are mostly provided by 67 local councils, including ours.

However, councils around the country are facing a number of challenges, including:

The Water Industry Commission for Scotland estimates that $120 to $185 billion needs to be invested in New Zealand's water services over the next 30 years, while the combined forecast spend in councils’ latest long-term budgets is about $81 billion.

There are also increasing concerns about the quality of New Zealand's drinking water and the safety of the infrastructure that delivers it.

The Government's inquiry into the 2016 drinking-water contamination outbreak in Havelock North, and the following Three Waters Review, has led to the introduction of a new national regulator for water services called Taumata Arowai.

Taumata Arowai has responsibility for overseeing and enforcing new drinking-water regulations and providing oversight of the environmental impacts of wastewater and stormwater.

In November 2021, Taumata Arowai assumed its role and powers as the new independent water services regulator for New Zealand under the new Water Services Act 2021, replacing the previous responsibilities of the Ministry of Health.

The Act contains all of the details of the new drinking-water regulations, the requirements for the protection of freshwater supplies, and Taumata Arowai’s wastewater and stormwater functions.

This entity will provide drinking water, wastewater and stormwater services to a total population of 864,350 people.

The proposed structure will see the 21 councils in most of the South Island represented by six elected members and six iwi representatives in a Regional Representative Group.

The Regional Representative Group will appoint an independent selection panel, who in turn would appoint the water entity’s board members.

The board members will independently govern the entity.

Councils will be the 'owners' of the entities, on behalf of their communities, in a ‘no shareholding’ ownership model, with no financial recognition of ownership.

Read the Government's Frequently Asked Questions about the entities(external link). 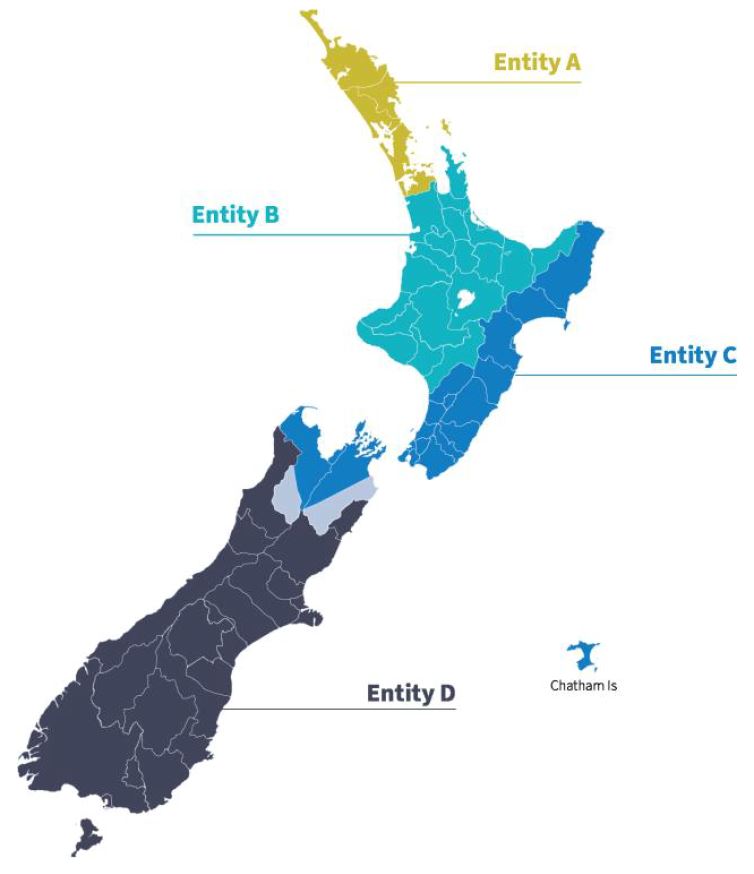 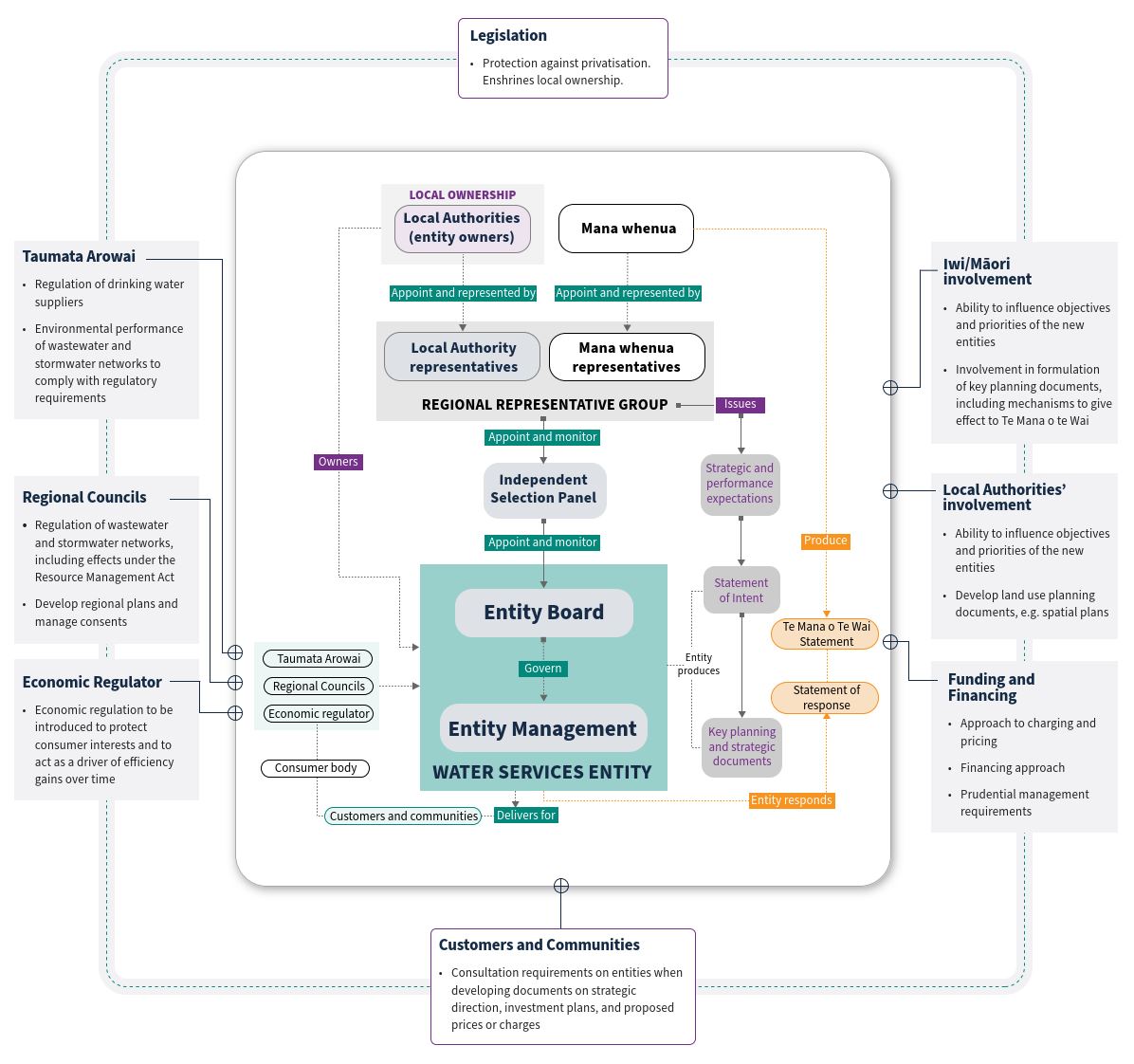 Proposed structure of the entities

On 15 July 2021, the Government announced that a total of $2.5 billion would be split between the councils that continue with the Three Waters Reform Programme.

The Crown would contribute $1 billion of this, and the new water entities $1.5 billion.

Christchurch would get $122.4 million, and this money could go towards projects that meet specific criteria related to improving resilience to climate change, housing development, and community wellbeing.

Additionally, Christchurch would also get a share of $50 million to be split between Auckland and Wellington too.

This $50 million is aimed at addressing the financial impact on councils as a result of the reform programme and the transfer of three waters assets, liabilities and revenues to the new entities. The exact amount Christchurch would get is yet to be determined.

What does the Government want to achieve?

The Government's main objective of the Three Waters Reform Programme is to provide a more efficient and consistent way of delivering three waters services across the country.

It is believed that by councils and communities joining together to provide these services at a larger scale, greater efficiencies and capabilities can be achieved.

Other specific objectives of the Three Waters Reform Programme can be summarised as follows:

For all New Zealanders and visitors. In 2016, thousands of people were infected in Havelock North by drinking water from contaminated bores. Four people died and others were left permanently disabled.

Affordable water services in the future

In some parts of the country, it is becoming increasingly unaffordable for councils, especially smaller councils with fewer ratepayers, to provide safe and reliable three waters services.

Increasing flooding events and sea-level rise will put pressure on three waters infrastructure and services. The Government is concerned about the ability of councils to meet this challenge without reform.

Same level of service for everyone

Through stage one of the reform process, the Government concluded there is ongoing underinvestment in three waters infrastructure in parts of the country. There may be large costs over the next 30 years as infrastructure is brought up to standard. These costs may be too much for some councils to carry alone.

With a new national water regulator, Taumata Arowai, and a new economic regulator being set up, the Government is concerned councils may not be able to meet future requirements without reform.

How is Christchurch City Council involved?

In July 2020, the Government announced a financial package to maintain and improve three waters infrastructure and to support a three-stage programme of reform.

Like many councils in New Zealand, we signed a memorandum of understanding (MoU) with the Government to receive the financial package(external link) and to explore possible new ways of delivering our three waters services in the future. The MoU did not commit us to change the way we delivered our water services.

To date, we have received the first half of the financial package (about $20 million) and the remainder will be paid to us as progress payments. All of the three waters projects we planned to fund are underway around the city, and competitive pricing on some large water-mains projects means we even have spare funding to commit to additional projects.

In January 2021, we responded to a national Request for Information from the Government. This allowed councils across the country to provide detailed information about their three waters networks to inform the Government's analysis and reform proposal.

We have also been part of the Joint Three Waters Steering Committee, with representatives from central and local governments overseeing and providing input into the design of the reform proposal.

The Steering Committee is made up of elected members and chief executives from local government, along with members of Local Government NZ (LGNZ), Taituarā (Local Government Professionals Aotearoa), and central government officials from the Department of Internal Affairs, the Ministry of Business, Innovation and Employment, and the Treasury.

In November 2021, Local Government Minister Nanaia Mahuta announced the establishment of a working group made up of local government and iwi representatives to recommend strengthened governance and accountability arrangements for the Three Waters Reform Programme. Christchurch Mayor Lianne Dalziel was appointed to the working group.

The group will report back in March 2022, to ensure there is time for its advice and recommendations to inform the final design of the entities.

The Council resolved on 9 December 2021 to sign a memorandum of understanding (MoU) to work cooperatively with at least 21 other co-signing councils to convince the Government to reconsider its plans to reform water services across New Zealand.

Deputy Mayor Andrew Turner will represent the Council on the partnership’s oversight group.

Our feedback to the Government

As part of the eight-week engagement period between the Government and councils during August and September 2021, we provided detailed feedback on the Three Waters Reform Programme.

In our feedback to the Government, we said:

On 27 September 2021, the Government announced it would introduce legislation to set up the four independent entities to control drinking water, wastewater and stormwater.

On 10 November 2021, the Government announced the establishment of a working group made up of local government and iwi representatives to recommend strengthened governance and accountability arrangements for the four water entities. Christchurch Mayor Lianne Dalziel has been appointed to the working group.

The Government is also planning to set up two more working groups: one to focus on the interface between the reform and the resource management system, and another to focus on transitioning rural community water supplies.

Watch the presentation to the Three Waters, Infrastructure and Environment Committee(external link) 11 Aug 2021

Campylobacter outbreak in Havelock North. Thousands of people were infected by drinking water from contaminated bores. Four people died and others were left permanently disabled.

Taumata Arowai set up as a Crown Entity, to regulate drinking water from late 2021.

Government financial package announced to improve water services delivery and to explore water reform in partnership with councils as part of a memorandum of understanding (MoU).

Christchurch City Council signs the MoU with the Government to receive the financial package and to explore water reform options.

Eight-week engagement period with the Government, to better understand the implications of reform for councils and communities.

The Water Services Bill is passed into law, becoming the Water Services Act 2021. The Act contains all of the details of the new drinking-water regulations, the requirements for the protection of freshwater supplies, and Taumata Arowai’s wastewater and stormwater functions.

The Government announced it will introduce legislation to move ahead with setting up four independent entities to control drinking water, wastewater and stormwater services in New Zealand, as outlined in its proposal earlier in the year.

The decision means councils and communities will no longer have a choice about whether to be a part of the new entities; it will be mandated by the Government.

Taumata Arowai takes over from the Ministry of Health as New Zealand's drinking-water regulator.