Our Coat of arms is symbolic and reflective of our City’s heritage. 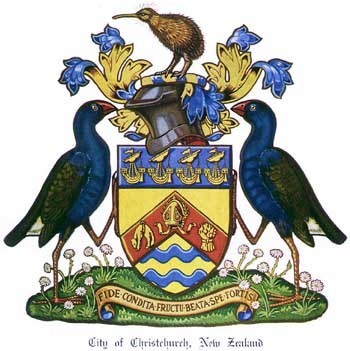 Although the motto can be translated as 'A city founded in faith, rich in the fulfilment thereof, strong in the hope for the future', the Latin means rather more than that:

The Coat of arms’ main features are:

The grant of armorial bearings as shown above was officially made by the UK’s College of Heralds by letters patent dated 21st February, 1949.

Or on a Chevron Gules a Mitre between a Fleece and a Garbe of the first, in base two Bars wavy Azure on a Chief of the last four Lymphads sails furled, also of the first And for the Crest on a Wreath Or and Azure a Kiwi proper.

On either side a Pukeko proper.

Although this coat of arms belongs strictly to our City, and may therefore only be used officially by the City, a similar badge may be used by those aligned or connected to Ōtautahi/Christchurch.