The intersection of Cashmere, Colombo, Centaurus and Dyers Pass Road is heavily used by people catching the bus, cycling, driving and walking. This includes school aged children from nearby Thorrington Primary and Cashmere High School.

A number of buses pass through this intersection, including the popular Orbiter bus route. However, bus stops are located some distance away which makes transferring between bus routes difficult.

There have been a number of injury crashes here involving people travelling by bicycle and motorcycle so we’re proposing changes to make it way safer for everyone.

We need to create a safe transport system; one where everyone can get where they are going safely – whether they’re walking, busing, biking or driving.

This approach supports Road to Zero, New Zealand’s national road safety strategy where no one is killed or seriously injured in road crashes.

We're proposing to install raised safety platforms on all four approaches to the roundabout. These platforms are designed to slow traffic and reduce the risk of collisions. If a collision does happen, the impact and risk of harm is reduced at lower speeds.

We also plan to:

These are proposed to be located: 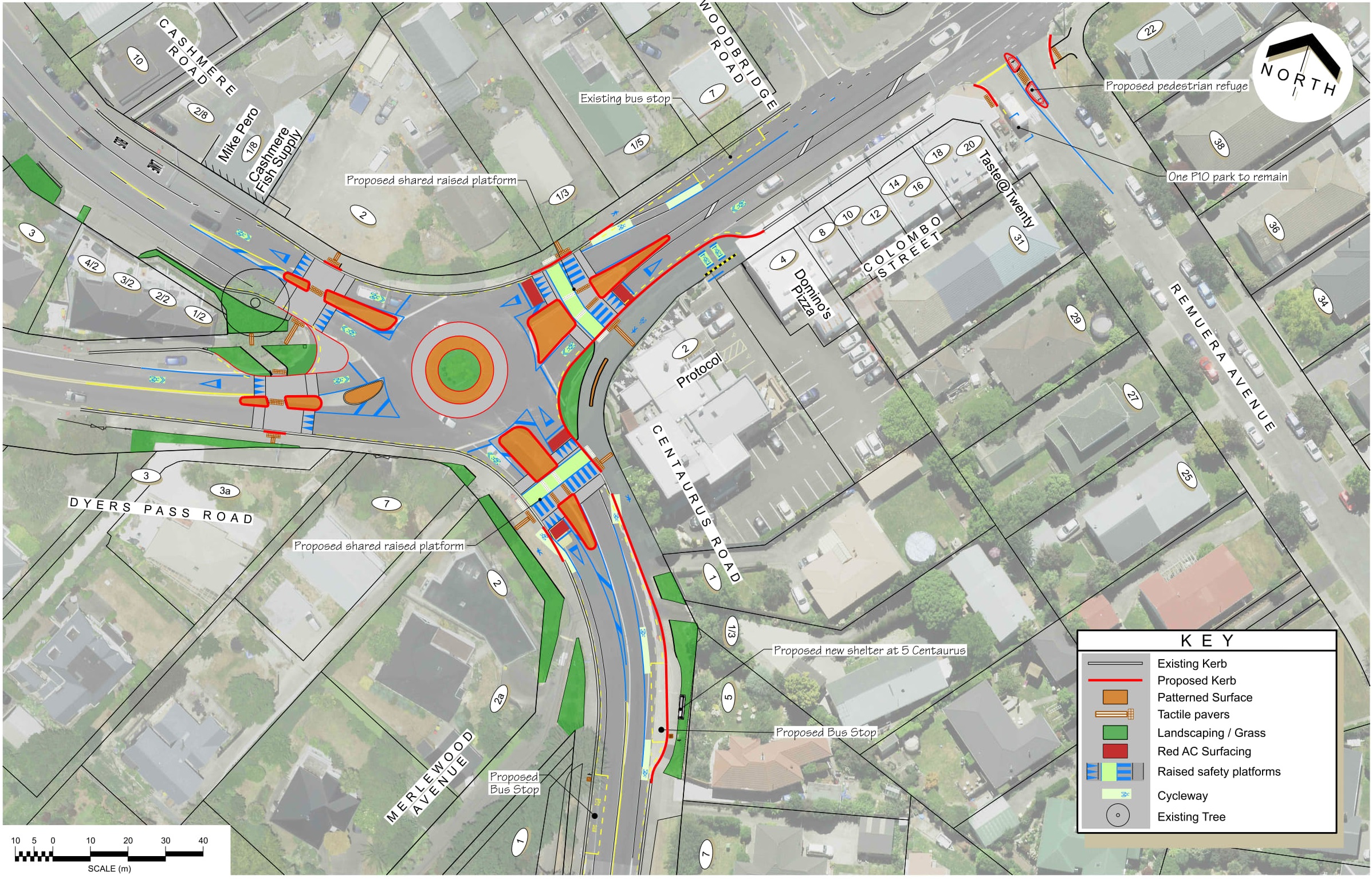 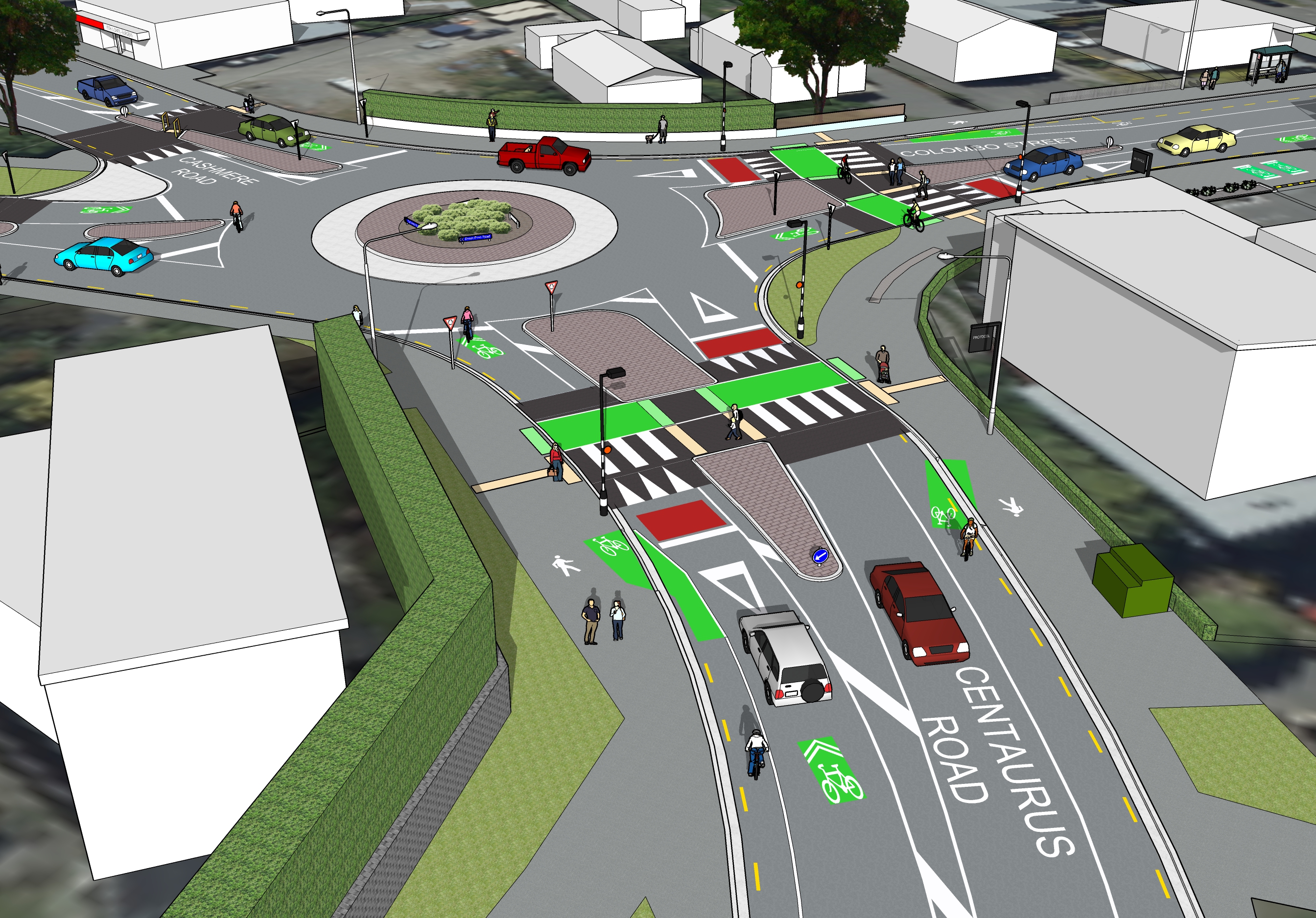 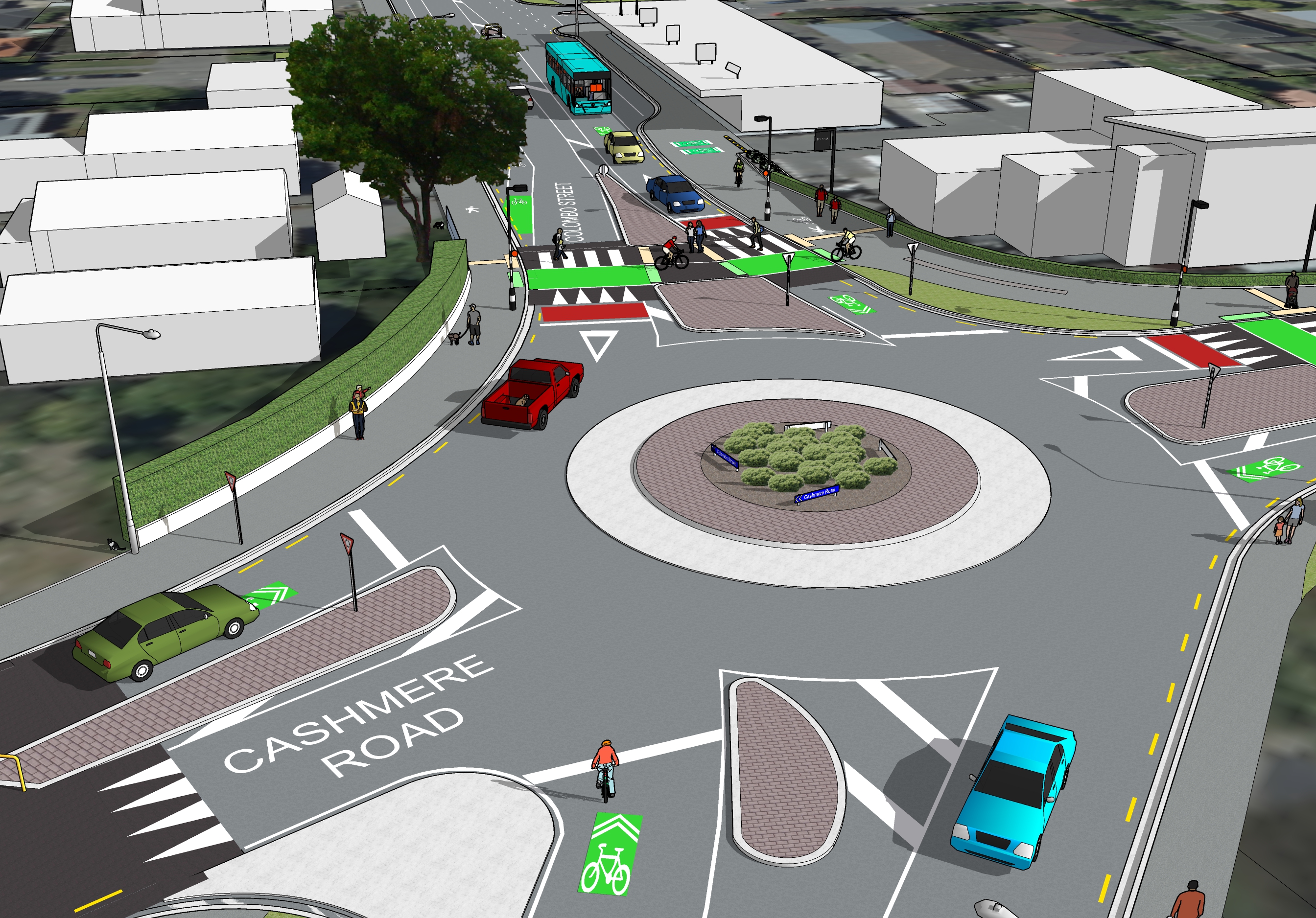 Can you please provide stats on injury crash rates at the intersection.

Why are we proposing changes at this intersection?

Having so many different users at this location means that the intersection is classed as a high-risk site which is an intersection where there is higher than usual risk, taking into account both likelihood and consequence of fatal or serious injury crashes.  Having people enter the intersection more slowly means that people have time to react. No one expects a crash, but people make mistakes – including those who are careful and responsible drivers. We need to build a safe road system that is designed for people. This means doing our best to reduce crashes but acknowledging that crashes will continue to happen. We can prevent serious injury or harm through a safe system approach, which incorporates safe speeds and safer infrastructure.

Council wants to reduce the number of serious crashes on our network so everyone can get where they are going safely regardless of how they travel. People will continue to make mistakes when travelling, so treatments such as the raised safety platforms seek to reduce the severity of injury when crashes inevitably occur.

There are a lot of people travelling through this intersection on foot, by bicycle, scooters and on motorbikes.  Evidence shows that if these people are hit by a vehicle travelling at 50km/h there’s only a 20 per cent chance they will survive. At 30km/h, the survival rate increases significantly to 90 per cent.  The platforms contribute to safer outcomes by reducing vehicle speeds to the more survivable speed of 30km/h.

Road to Zero is the government’s strategy to significantly reduce road trauma over the period 2020 to 2030. The strategy’s vision is an Aotearoa New Zealand where no one is killed or seriously injured in road crashes. This means that no death or serious injury while travelling on our roads is acceptable. The strategy puts in place an ambitious target of reducing deaths and serious injuries on our roads by 40 percent over the next 10 years.  Underpinning this vision is the Safe System approach, which acknowledges that we all make mistakes on our roads but that these mistakes should not cost us our lives.  Even small reductions in travelling speed can have large effects on injury outcomes.  The raised platforms were recommended at this location to help facilitate reduced entry speeds, reducing both the likelihood and severity of crashes. This is especially important considering the types of crashes that have occurred and the high incidence of crashes.

Why would vehicles and cyclists sharing the lane be considered a better alternative than segregation?

In this case there is little room at the intersection to provide fully segregated options, although this has been incorporated where possible, for example for riders turning right from Centaurus Road to Colombo Street, there is the option provided of using the priority crossing points to undertake this manoeuvre. Even if more separation was possible, there would still be a need to cross the road on the roundabout approaches. Experience has shown that this in itself also results in significant delay for cyclists resulting in many cyclists choosing to stay on road.

Research and best practice shows that roundabouts can be designed so they are safer and more attractive for pedestrians, cyclists and motorcyclists. These users are more vulnerable to serious injury or death from impact as they do not have the same protection as vehicle occupants. The research behind safe system thinking shows us that to minimise the risk of serious injuries, vehicle speeds need to be below 30km/h. These lower speeds result in less differential in speed between cyclists and other traffic and provide more time for users of the roundabout to react to other traffic and avoid potential incidents. In turn this reduces both the likelihood of all types of crashes and also reduces the severity of injuries when they do occur.

The Waka Kotahi Cycling Network Guidance states that cycle lanes should not be used at roundabouts, as they put cyclists in a less safe position.  Where cyclists use the roadway at roundabouts, they are encouraged to ‘take’ the lane so people riding a bicycle are in a central position within the lane (similar to a driver) and that people approaching are in a single file. To do this safely and to feel comfortable, vehicle speeds need to below 30km/h.  The guidance recommends that cycle lanes and road shoulders should be terminated prior to the entry of the roundabout and sharrows be marked to indicate that cyclists share the lane.

What is the rational for removing the left turning lane on Dyers Pass Road downward to Cashmere Road?

The short left turn lane has been removed to reduce the width to a single lane exit which will improve visibility for drivers exiting.  Currently a through or right turning vehicle will mask the left turning vehicle creating additional risk in the intersection for any person travelling across this entry.

Is the radius for the left turning lane on Dyers Pass Road downward to Cashmere Road designed to be trafficable for larger vehicles needing more manoeuvrability?

Yes, there is an overrun area for larger vehicles needing to turn left from Dyers Pass Road into Cashmere Road.

Do you have safety concerns of vehicles being 'rear ended' when travelling through the roundabout then stopping to let pedestrians over the crossing.

Having people enter the intersection more slowly means that people have time to react and therefore crashes of any type including rear end are less likely to occur. If rear end crashes do occur they tend to result in very minor outcomes compared with a pedestrian being hit which can result in serious injuries even at lower speeds, particularly where they involve children or the elderly.

Why are traffic lights not a preferred option?

The intersection was subject to crash investigation study in January 2021, which identified this site as a High-Risk intersection in accordance with the Waka Kotahi NZ Transport Agency High Risk Intersection Guide. The study identified poor roundabout geometry which resulted in higher speeds at the roundabout increasing the risk to people riding through the intersection on bicycles and motorcycles, and people crossing the road.

To make New Zealand’s roads and streets safe for everyone, Council is guided by the safe system approach.  A roundabout is considered a primary safe system treatment because it requires people driving to slow down and understand what is happening to navigate the intersection, people are more likely to survive a crash because of the slower speeds of people entering the roundabout.

At a signalised intersection, red light running can occur and if drivers maintain higher speeds through the intersection, should a crash happen the severity of the crash would still result in death or serious injury. Evidence shows that if people are hit by a vehicle travelling at 50km/h there’s only a 20 per cent chance they will survive. At 30km/h, the survival rate increases significantly to 90 per cent.  Due to the high number of people walking, cycling and scooting through the intersection any signal-controlled intersection would also need to incorporate measures to lower the speed of vehicles traveling through for safer outcomes of all road users.

It is noted that the utilisation of raised safety platforms to the existing roundabout achieves a similar level of safety to traffic signals with a raised safety platform at a much more affordable cost. This project does not in itself preclude the addition of traffic signals if they were required in the future. In the interim, without intervention, the safety risks that have been observed are likely to result in a continuation of harm to our most vulnerable road users.