The sole Canterbury remnant of an ancient podocarp forest that once covered larger areas of the region.

The grounds are open from early until dusk throughout the year.

The historic homestead operates guided tours at 2pm, Monday to Friday, and at 11am and 2pm on Sundays, for a fee. Visit over 20 rooms, restored, decorated and furnished in period style with many original family items on display. Visit the Riccarton House and Bush(external link) website run by the Riccarton Bush Trust for more information

Dogs are prohibited within Riccarton Bush itself and should not pass the predator-proof fence.

Dogs are allowed in the Riccarton House grounds but must be kept on a leash to protect the heritage gardens.

Deans Cottage and Riccarton House Homestead is flanked by open parkland and ornate gardens and set against 12 hectares of remnant native forest and the Ōtākaro/Avon River.

Explore Riccarton House with a guided heritage tour or dine in the on site restaurant. Deans Cottage is the oldest building on the Canterbury Plains and can be visited at any time.

Riccarton Bush contains many examples of native trees and shrubs, including the massive trunks of kahikatea as well as matai, phoara, titoki and hinau. Trees in the sub-canopy include kohuhu and the large-leaved tarata (lemonwood). Mahoe and karamu are abundant along tracks and clearings, while cabbage trees (ti kouka) and New Zealand flax (harakeke) are dominant in the damper areas.

A profusion of climbers including native jasmine, pohuehue, bush lawyer and New Zealand passion vine gain their moisture from the ground and weave their way from the dense floor to the high canopy. The passion vine and several other trees such as titoki and hinau are at their southern limit here.

Birdsong echoes through the bush from both native and introduced birds, such as the fantail (piwakawaka), silvereye (tauhou) and grey warbler (riroriro). Riccarton Bush is the main centre of Christchurch's small resident population of wood pigeons (kereru).

Enjoy one of two walking tracks in Riccarton Bush.

Pūtaringamotu/Riccarton Bush has a significant natural and cultural heritage. The trees in Pūtaringamotu/Riccarton Bush include kahikatea, totara, matai and hinau, some of which are 600 years old and descendants of a 6000-year-old floodplain forest. A number of native climbing plants, ferns and mosses are also found here. Fossil records show that the bush was once home to kiwi, takahe and moa.

Today, the 12 hectare bush is protected by a predator-proof fence. It is home to weta and used as a creche for young kiwis where they can learn to survive on their own before being released into the wild.

Pūtaringamotu was also a valuable food and timber source for Ngāi Tahu before European settlement.

Read more about the history of the Ngāi Tahu in Pūtaringamotu/Riccarton Bush on the Christchurch City Libraries website.(external link)

The first successful European settlers to Pūtaringamotu were the Deans brothers, William and John, who emigrated to New Zealand from Scotland in the 1840s. They renamed their area of settlement Riccarton after their home in Ayrshire, Scotland and renamed the Otakaro River the Avon after the river that ran by their grandfather's property in Lanarkshire.

After agreeing to give up half of their bush settlement to the Canterbury Association, they used the timber in their own half carefully. Some kahikatea and matai was used to frame their buildings but only dead or fallen timber was used as firewood and fencing. In the meantime, the half they gave up was completely cleared by 1851.

In 1914, the Deans family presented the remaining bush to the people of Canterbury under one condition: that it be preserved for all time in its natural state.

Read more about the history of the Deans family and Riccarton Bush on the Christchurch City Libraries website(external link). 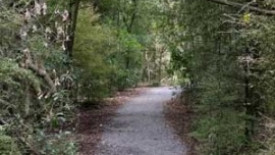