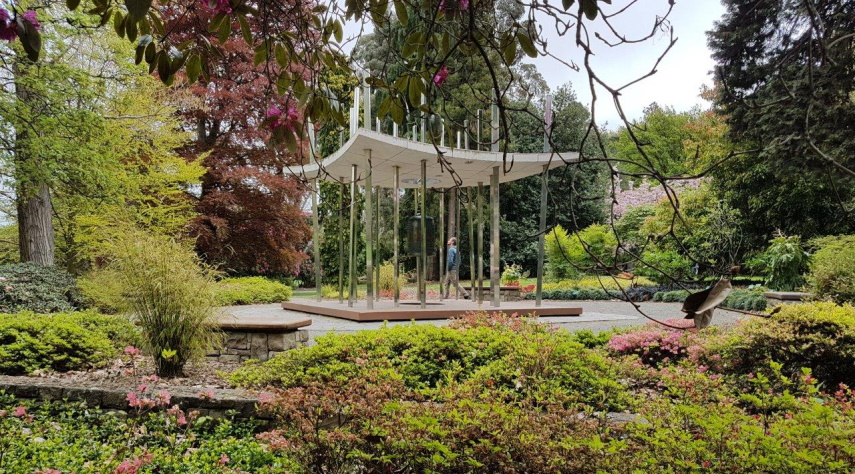 The bell was cast from coins donated by UN member countries, symbolic of the world being one. Unveiled in 1954 at the UN headquarters in New York, the World Peace Bell represents everlasting world peace and a world free from nuclear war.

The Christchurch Botanic Gardens was chosen as the location for the New Zealand Peace Bell. Once the site was blessed by Ngāi Tahu, a raised pavilion was constructed in 2005. The massive 365 kg bell is inscribed with the English 'World Peace Bell' and Japanese 'sekai heiwa no kane'.

In the same year, part of this pounamu - Ira Atua Wahine - was placed under the Te Korowai Rangimarie-Cloak of Peace  sculpture (by Kingsley Baird) gifted to the Nagasaki Peace Park by the New Zealand government and six city councils. Now every time the New Zealand World Peace Bell is rung, the pounamu resonates between the two countries.

The New Zealand chapter of the World Peace Bell Association, Te Pere Iha Rakaraka o Te Aio, was instrumental in Christchurch being gifted the bell. Building strong relationships with their Japanese counterparts, volunteer members visited Japan on numerous occasions to promote the idea of Christchurch receiving the bell as well as fundraising for a bell house and arranging transportation of the bell from Japan to Christchurch.

Christchurch has a rich peace heritage including conscientious objection to war, a strong anti-nuclear movement and peace education initiatives. In March 1982, the city became the first municipality in New Zealand to declare itself nuclear-free and in 2002, the first in the country to be named as a 'Peace City'.

Near to the bell sits an attractive grove of Japanese maples (Acer palmatum), a fitting backdrop as maples symbolise peace, serenity and tolerance. A camphor tree is nearby, the seedling propagated from a camphor that survived the atomic bombing of Nagasaki and gifted to Christchurch by late Mayor of Nagasaki, Iccho Itoh.