A new forest is planned for Linwood College’s lower fields, off Ferry Rd in Woolston and is a key component in Christchurch City Council’s Bell’s Creek flood mitigation scheme.

The Council is buying the fields, which have not been used by the school since they were damaged in the earthquakes, with the aim of turning them into a forested wetland reserve.

Thousands of native trees and plants will soon be planted on the site which will also act as a storage basin, reducing the frequency and severity of flooding in the surrounding area.

It’s hoped the 2.75 hectare forest will attract bellbird, kereru, fantail, grey warbler and in the future, even tui, kakariki and kaka, back to the Woolston area.

The reserve is strategically located to provide both a core habitat and a stepping-stone for native bush bird movement across the city between areas such as Riccarton Bush, Travis Wetland and Styx River Reserve network and the Port Hills reserves.

It will be accessible to the public during the day with a sealed pathway and boardwalk bridges to allow the community to explore and enjoy a piece of wilderness in a residential area.

The reserve will be planted with forest dominated by totara, matai and kahikatea trees. These species have been chosen to replicate what is growing in Riccarton Bush and the totara and matai stands that once made up the 30 hectare stand at Papanui Bush before the area was developed.

A five-metre gap of grass between the forest and properties will reduce any fire risk. Council is offering adjacent property owners the opportunity to install pool-style fencing around the boundary of the reserve to improve visibility into the reserve, which will be kept locked at night.

This project was started as a student research project, funded by the Friends of the Christchurch Botanic Gardens and University of Canterbury.

Native mistletoes are hemi-parasitic. This means they need to take nutrients and water from another plant (their host). But they still photosynthesise and produce flowers and fruit.

For this project, the Council focused on one of the green mistletoe, Ileostylus micranthus, which has all but disappeared from urban Christchurch. This species grows on over 200 host trees and shrubs and is currently found on the Port Hills and Banks Peninsula, however native birds, needed to spread mistletoe, are rarely found in the city. This means mistletoe isn’t returning naturally and needs our help.

Encouraging the growth of mistletoe will boost biodiversity—and attract native birds and insects.  Last year, mistletoe was seeded throughout the gardens, and 33 plants have established.

Green mistletoe/pirita (Ileostylus micranthus) is known to grow on over 200 types of trees, both native and exotic. 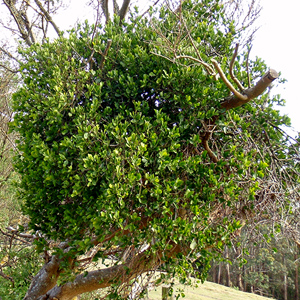 Ileostylus grows on shrubs and trees, forming an evergreen ball of lush leaves - it can grow up to 2m but its more commonly around 1m.

This mistletoe produces small green flowers in summer and bright yellow fruit through autumn and winter.

During winter when your deciduous trees lose their leaves, the mistletoe will brighten your garden. Green mistletoe is also known to attract native birds, and insect pollinators such as bees.