A history of women's suffrage in Christchurch, and information on monuments, memorials and awards. 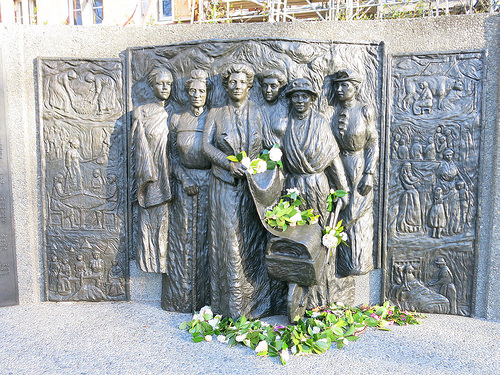 The struggle for the right to vote

New Zealand women were granted the vote on 19 September 1893, when the approval of the Governor was finally given to the Electoral Bill passed by Parliament eleven days earlier.

This success came at the end of an enormous struggle by suffragists in New Zealand, led by Kate Sheppard. It was a seven-year campaign, which culminated in the 1893 petition being presented to Parliament in a wheelbarrow. It was the largest petition ever gathered in Australasia, with 31,872 signatures supporting the enfranchisement of women.

The importance of this struggle was captured in the words of The White Ribbon editor, Nelly Perryman, 25 years later, "We, the mothers of the present, need to impress upon our children's minds how women of the past wrestled and fought, suffered and wept, prayed and believed, agonised and won for them the freedom they enjoy today."

All New Zealand women to vote

Women's enfranchisement in New Zealand was unique in that the vote was extended to all women. Maori women were involved in two campaigns, with some Maori women supporting the Women's Christian Temperance Union (WCTU), which sought the right for women to vote for members in the New Zealand House of Representatives, and others, such as Meri Te Tai Mangakahia, seeking the right to vote and stand as members of the Maori Parliament, Te Kotahitanga.

When the issue of enfranchisement for Maori women came up in the House of Representatives, 'the voices of the friends of the Maori ladies rose in such a roar,' that their feelings on the subject were clear.

As well as including women of different ethnicities, the campaign for women's suffrage included in its support base working women alongside the educated elite, and rural women together with their urban sisters.

Of local, national and international significance

When the vote was gained, praise in the form of telegrams and letters flowed in from overseas. Catherine Wallace wrote to the suffragists from Melbourne: "Your long, patient, faithful, untiring, earnest, zealous effort is finally rewarded, which means so much, not for you and the women of New Zealand only, but for women everywhere on the face of the globe."

This was an event of not only national, but also international, significance. New Zealand was, after all, the first self-governing country in the world to grant women the right to vote in parliamentary elections. In Christchurch, the enfranchisement of women is still celebrated on the 19 September each year. Known as Suffrage Day, or White Camellia Day, people from all walks of life gather at lunchtime at the Kate Sheppard National Memorial where they share their thoughts and place white camellias.

During the campaign for women's suffrage, those who supported the 1893 Electoral Bill were presented with a white camellia to wear in their buttonhole. The white camellia has since become an endearing symbol of women's suffrage in New Zealand, and a new variety, named after Kate Sheppard, was created for the 100th anniversary in 1993.

The memorial was unveiled on Suffrage Day 1993, the 100th anniversary of women's suffrage, and is located on the Reserve, corner of Oxford Terrace and Worcester Boulevard adjacent to Our City O-Tautahi.

From 1885 the Women's Christian Temperance Union (WCTU) campaigned to end the poverty and violence caused by alcohol abuse. The members realised that the vote was needed to ensure reform.

Kate Sheppard, Franchise Superintendent of the WCTU led an intensive seven-year campaign for the vote for women. She spoke at public meetings, lobbied politicians with telegrams and letters and wrote many pamphlets with kept the debate alive. She inspired and encouraged many women to join the cause of liberty and justice.

Opposition was fierce and determined but the suffragists gained increasing support when women outside the temperance movement joined them. A series of nationwide petitions was organised.

A leading suffrage supporter, Sir John Hall, presented the 1893 petition to Parliament during the debate on the Electoral Bill. The Bill, giving women the vote, was finally passed with a majority of two.

The National Council of Women grew out of the networks of committed and able campaigners and Kate Sheppard was the first president in 1896. She had a vision of a society where women and men should share equal rights and responsibilities. Women of diverse cultures worked to win the vote. They were young, middle-aged and old, and came from all parts of New Zealand.

The six leading suffragists shown on the Kate Sheppard National Memorial represent all women of the suffrage movement. From left to right on the centre panel are:

On the memorial, Kate Sheppard is seen holding the petition, which is resting in a wheelbarrow. The 1893 petition was so large it is said that a wheelbarrow was needed to take it into the House of Representatives.

The side panels of the memorial show women of the time in typical everyday settings – gathering shellfish, teaching, factory sewing, farming, caring for families and nursing. These are flanked by bronze panels telling the suffrage story. A time capsule is set within the memorial and contains a record of all donors and material relevant to womens' lives in 1993.

The memorial stands in the specially landscaped area, now known as the Kate Sheppard National Memorial Reserve, on Oxford Terrace beside the River Avon. The camellia and ribbon shown on the memorial title plaque are symbols of the suffrage campaign. White camellias were given by the suffragists to male members of parliament who supported the cause. A white ribbon is the emblem of the WCTU.

In 1989 a group of Christchurch women, Women Towards 2000 Inc. believed there should be a permanent memorial to commemorate the centennial of women's suffrage in New Zealand. The Kate Sheppard National Memorial to Women's Suffrage, in the city where it all began, is due to their vision and enterprise.

Margriet Windhausen of Maungatai, South Canterbury trained at the Maastricht Academy of Fine Arts in the Netherlands. She came to New Zealand in 1976 and besides teaching art and sculpture, has completed many commissioned works for public and private collections.

Goals still to be achieved

Dame Cath Tizard, then Governor General of New Zealand, said in 1993 it was important to remember that the memorial did not mark the final resting place of a set of goals. Instead, she said, it was a physical reminder of the need to keep making progress towards them.

The welfare of the family was one of the key concerns of the suffragists in their campaign for the vote. The WCTU, established in New Zealand in 1885, was intrinsic in the suffrage campaign. It campaigned for women's votes on the basis that women would vote for the prohibition of alcohol, which was seen as the root of all social distress.

Mrs Georgina Abernathy, at a Women's Franchise League Meeting in Gore in 1892, stated that "It is for the good of the family, and the young around us, that we are requesting justice at the hands of the state."

We have achieved some of the goals the suffragists were aiming for all those years ago. By 2003 New Zealand had had two women Prime Ministers, a Maori Queen, women Governor Generals, Chief Justice and Attorney General. If Kate Sheppard was looking down on us today, what would she think? Dame Cath imagined a measure of disappointment in her gaze. "She will be grieved that so many women are still victims of homelessness, poverty and violence."

It is towards this end, and for the good of the family, that we must continue to work today. The work of the suffragists, and of all women who have gone before us, is not yet complete. When formed in 1989, Women Toward 2000 (Inc) decided that one of their projects would be to erect a permanent memorial to commemorate the 1993 Centennial of Women's Suffrage in New Zealand.

It was seen as appropriate that this memorial should be sighted in Christchurch and should focus on Kate Sheppard, the distinguished Christchurch suffragist.

In 1993, the Kate Sheppard National Memorial Wall(external link) was unveiled by the Governor General of New Zealand, Dame Catherine Tizard.

Funding for the wall was raised locally and nationally, and specially designated donations were also received for a proposed Kate Sheppard Scholarship Award. The Kate Sheppard Memorial Award Trust was set up to establish an annual award that would provide an opportunity for a woman holding New Zealand citizenship or permanent residency to: "develop her potential by undertaking further education, study, research or training in areas which are of value in the community of New Zealand".