Find out more about some of the statues we have here in Christchurch. A marble sculptured statue of Captain James Cook set on a granite base, two bronze plaques are set into the base.

The statue commemorates Cook's three voyages around New Zealand and was donated by bookmaker and philanthropist Matthew Barnett (1861 to 1935).

Artist William Tretheway was chosen as the sculptor and he carved the statue from a 12-tonne block of Carrara marble.

Unveiled in 1932, the statue was originally located at the junction of Colombo and Victoria Streets until it was moved in 1989 to its current, more central location.

There is more information about the statues in Christchurch on the Christchurch City Libraries website(external link). A marble statue of Robert Falcon Scott set on stone base memorialising the death of Scott and his party on their return from the South Pole in 1912.

A Christchurch committee commissioned Scott's widow Kathleen to sculpt an exact replica of the bronze statue of Scott that stood in Waterloo. Because of the rising cost of metal during the First World War, it was more cost effective to sculpt in marble but as Britain had banned the importation of marble, Kathleen had to travel to Carrara, Italy in order to create the statue.

The Scott statue was finally unveiled in 1917, an inscription, one of Scott's last diary entries, is carved into the stone.

'I do not regret this journey which shows that Englishmen can endure hardships, help one another and meet death with as great fortitude as ever in the past.'

Three marble plaques were added to the statue; one displays the text from the now unreadable inscription, another lists the names of the five explorers who died and the last and most recent recognises Kathleen Scott as the sculptor. 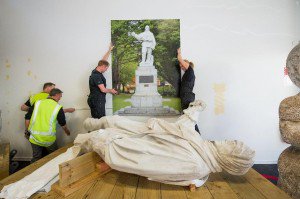 A hundred years on from its unveiling, conservation efforts took place to repair and reinstate the white marble statue of Captain Robert Falcon Scott, CVO, RN onto its original stone base.

The 2.5 tonne, 2.6 metres high statue was badly damaged in the 22 February 2011 earthquake, toppling from its plinth and snapping at its most vulnerable part, the ankles.

The Scott statue was reinstated in October 2017. 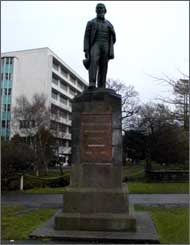 The commemorative bronze statue of James Edward Fitzgerald, the first superintendent of the Province of Canterbury (1853−57), was donated by Christchurch citizen Richard Green. The sculptor Francis Shurrock was a leading interwar New Zealand sculptor.  The statue is on a stone plinth on a concrete base.  A terrazo plaque is inscripted on the front of the plinth.  The inscription reads: 'James Edward Fitzgerald First superintendent of Canterbury 1853–1857.' 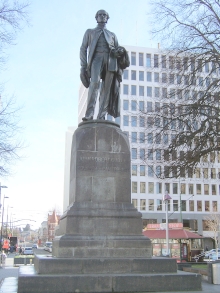 This is a two-metre bronze standing figure of John Robert Godley (1814–1861), Resident Chief Agent for the Canterbury Association and the acknowledged ‘Founder of Canterbury’. The statue was originally installed in Cathedral Square in August 1867 and is one of the earliest public statues erected in New Zealand. The bronze statue is the only example of noted Victorian Pre-Raphaelite sculptor Thomas Woolner’s work in New Zealand.

The statue has a Group 1 heritage listing in the Christchurch City Plan and is listed as a Category I historic place(external link) by Heritage New Zealand. This is the highest possible protection rating.

During the February 2011 earthquake the statue fell of its plinth, suffering damage to the limbs and back of the head. The statue was on display in Canterbury Museum and Quake City before being removed for repair on 28 April 2014. Advice was sought from international conservation experts on the best restoration method. Restoration work included strengthening and bronze repairs. During the conservation process a Victorian moulding hammer was found preserved inside the arm of the statue.

The statue was reinstated at Cathedral Square on 18 February 2015.

There is more information about this statue on the Christchurch City Libraries website(external link).

The bronze statue on stone plinth of William Sefton Moorhouse, was the region’s longest serving Canterbury Provincial Superintendent, serving from 1858−62 and 1866−68.

Moorhouse is known for his support for the Lyttelton rail tunnel, between Lyttelton Port and the Canterbury Plains, which went on to be completed in 1867. Several inscriptions are carved into the stone.

The sculptor's name is worked into the rear of the plinth - G. A. Lawson Sc. 1885. Renowned English sculptor G.A. Lawson produced a model for this work based on photographs. 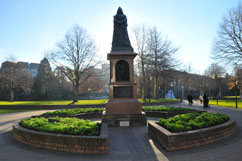 Bronze statue of Queen Victoria mounted on large square stone base. There are six bronze inserts on the base depicting early colonial occupation. Two bronze plaques are also inset, one as a war memorial to the 1901 African War and the other naming the statue. A white marble plaque is inset at the base of the statue.

There is more information about the statues in Christchurch on the Christchurch City Libraries website.(external link) 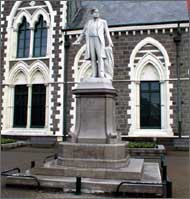 The Bridge of Remembrance

A War Memorial erected by the citizens of Christchurch in 1923 to initially honour the sacrifice made during the 1914–1918 Great War. It also serves as a memorial to those who participated in both World Wars and in subsequent conflicts in Borneo, Malaya, Korea and Vietnam.

The memorial was designed by architect William Gummer and stonemason Frederick George Gurnsey.

Visitor information is available at the site. Download a copy of the short history of the Bridge of Remembrance [PDF, 1.2 MB].

The Bridge of Remembrance was structurally damaged in the 22 February 2011 earthquake, but inspections soon after suggested it was stable. There was no apparent worsening of the structure as a result of the aftershocks on 13 June 2011 and 23 December 2011.

From January to April 2012 tests were carried out to determine the ground conditions around the bridge abutments. This information is essential as part of the design process to develop the best permanent repair strategy for the Bridge. Options for permanently repairing the Bridge and Arch were investigated throughout 2012. The earthquake repairs on the Triumphal Arch are complete.

The post-tensioning work is complete in the minor and major arches. The internal cavities of these arches are now filled with concrete. In total there were 30 concrete pours with a total of 220.5m3 of concrete.

The arch is now a rigid structure with the stone work as a façade. The mechanisms that have been installed i.e. sliding joints and rocking collars, will allow this rigid structure to move in a controlled manner if there is another seismic event.

Each joint is made up of steel plates that will slide on each other in a controlled manner. All the stone that was removed to either be repaired or to allow access for the installation of the mechanisms has been placed back on the arch. The symbols that sit in the middle of each arch have been put back in place.

People will have noticed that the lions are again sitting on top of the minor arches. When work started in June 2013 the lions were removed and carefully placed in storage.

The lions were originally carved in six pieces. Some of the earthquake damage included cracking along these joins as well as spalling or chipping of the stone. The tail ends, that are attached to the main arch structure, shattered.

The return of the lions was a slow process as each piece was carefully put in place to ensure they were not damaged. The stone masons then repaired the lions on site. They have carved some new pieces as well as doing small repairs to the cracks.

Stainless steel pins have been inserted into the lions to prevent shear movement, movement from forces along the base of each lion. This is added protection if there is another seismic event.

All the attachments and symbolism has been returned to the arch. The bronze lanterns have been hot waxed as part of their annual maintenance and installed along with the flags. 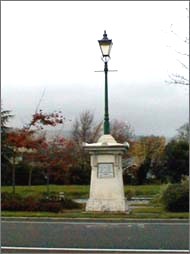