The restored Christchurch Town Hall has returned to a premier performance and civic venue after reopening in 2019.

The restoration of the Douglas Lilburn Auditorium, the Avon Room (the former Boaters Restaurant), Victoria and Limes Rooms was completed in February 2019 and the public got a chance to see inside for the first time(external link) during two open days.

Christchurch Symphony Orchestra (CSO), with Shapeshifter, were the first to perform in the newly restored Town Hall's Douglas Lilburn Auditorium on 1 March 2019.

The James Hay Theatre reopened in May 2019(external link), with the Celtic Tenors the first to take to the stage on 29 May.

The purpose-built facility for the Christchurch Symphony Orchestra (CSO), the CSO Centre, opened in August 2019. It gave the CSO a permanent home within the Town Hall complex for the first time. The CSO Centre houses the orchestra’s rehearsal rooms ( known as the Ron Ball Studio), administration offices, the Rodney Eastgate Music Library and the Players’ Lounge. The CSO Centre has replaced the Town Hall’s damaged Cambridge block, which was demolished as part of the restoration project.

Local photographer Olivia Spencer-Bower recorded time-lapse footage of the Town Hall restoration over the course of the project. Thousands of images recorded over three and a half years have been edited into this 10-minute video. 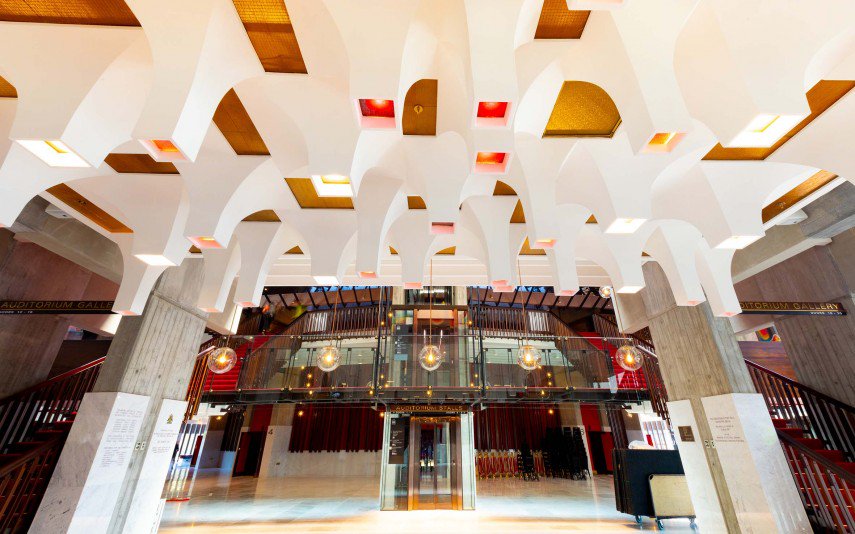 The Town Hall has been strengthened to 100 per cent of the new building standard and significantly refurbished, ensuring it is a modern, world-class facility that can be enjoyed for many years to come.

We identified opportunities to bring the Town Hall up to modern standards as construction has progressed while retaining its unique heritage features.

The Council considered a report outlining the damage and providing options on the future of the Town Hall.

The Council voted unanimously to repair the existing facility to 100 per cent of New Building Standard.

Following overwhelming support from the public to restore the Town Hall as part of the 2012/13 Annual Plan process, the Council reconfirmed its commitment to restoring the facility to 100 per cent of New Building Standard on 29 August 2013.

Christchurch City Council votes to fully repair and restore the earthquake-damaged Town Hall at a cost of $127.5 million.

Hawkins is appointed as the main contractor and site preparations begin.

The option of building a new 1500 seat auditorium and 600 seat theatre on a new site – as outlined in the Christchurch Central Recovery Plan – at a cost of $193.5 million was considered by the Council, but rejected.

Approval is given to upgrade the Auditorium’s stage by installing stage lifts.

The decision is also taken to improve the Avon Room's (former Boaters restaurant) accessibility by making the floor all one level.

Approval is given to add acoustics to the James Hay Theatre to improve the sound quality.

As part of its 2016/17 Annual Plan process, the Council adjusts the budget for the Town Hall to take into account inflationary pressures. The adjustment takes the total approved budget to $133.1 million.

A fly tower (or theatrical rigging system) is added to the scope of works for the James Hay Theatre.

Retractable seating is approved for the James Hay Theatre.

Agreement is given, in principle, for the Cambridge Room to be rebuilt as a purpose-built facility for the Christchurch Symphony Orchestra.

Approval is given for additional security cameras to be installed in the Town Hall.

Council approves additional budget for improvements to the Town Hall, bringing the total budget to $152.2 million.

The first areas in the Town Hall, including the Douglas Lilburn auditorium, the foyer, the Avon Room (former function room), the Victoria and Limes Rooms, are complete. Public open days will run from 23-24 February.

The first event, CSO with Shapeshifter, was held in the newly restored Town Hall on 1 March 2019.