The Performing Arts Precinct is the city's outlet for creative performance, offering first-rate facilities for music, drama, dance and other performing arts.

One of the anchor projects in the Christchurch Central Recovery Plan, the Performing Arts Precinct is being built in the block bounded by Armagh, Gloucester, Colombo and New Regent Streets. 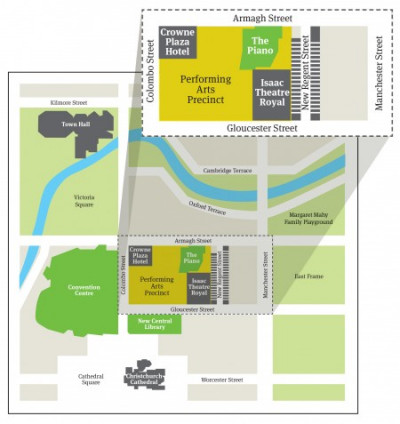 A new central city home for The Court Theatre

The new Court Theatre will be built on the corner of Gloucester and Colombo Streets in the Performing Arts Precinct.

It will include a 360-seat main playhouse auditorium, a 120-seat studio theatre and front of house facilities.

Athfield Architects is partnering with London theatre designers Haworth Tompkins. Haworth Tompkins has already worked closely with The Court Theatre and has been involved in the design of world-renowned United Kingdom theatres such as the Bristol Old Vic, The Liverpool Everyman, the Battersea Arts and Regent’s Park Open Air centres in London.

The Council is committing $30 million towards the development of the Performing Arts Precinct, which includes the construction of The Court Theatre, a public realm area and landscaping. This funding was set aside in the Council's Long Term Plan 2018-28.

Construction of the new Court Theatre is expected to begin in early 2022 and it is due to open in late 2023. Approach from Cathedral Square at daytime Approach from Cathedral Square at night Gloucester Street side and lane 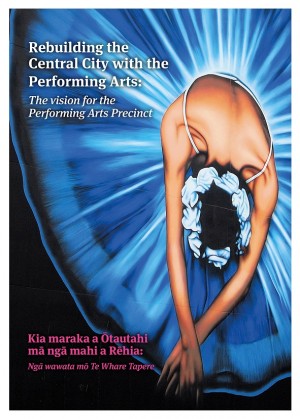 The Council and the Central Christchurch Development Unit jointly managed the development of the Performing Arts Precinct site before the disestablishment of the Canterbury Earthquake Recovery Authority.

They worked with a stakeholder group to develop a shared vision of what the Performing Arts Precinct could be.

It picks up on themes from the Share an Idea campaign around activation, vibrancy, diversity, mixed uses, collaboration, and access for all.