Welcome to the Fairy Village of Bottle Lake Forest! 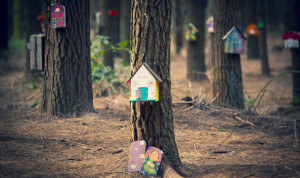 Please make sure you install your house within the village to protect fairy occupants from ogres! 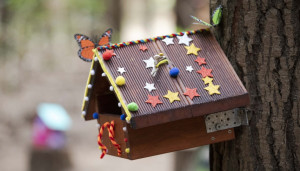 The fairy houses sprung up during the Covid19 lockdown with many families passing through the forest for exercise. From a few scattered houses to hundreds, the fairy forest became an outlet for creativity and entertainment for children (and adults!) stuck at home. Unfortunately, the location of the fairy houses was in an area of forest due to for sustainable logging so the park ranger team decided to help the fairies move to their current village.

An area of the central Bottle Lake Forest Park is being used for the Burwood Resource Recovery Park(external link) operation following the Canterbury earthquakes in 2011.

Blackbirds, sparrows, finches, silvereyes (tauhou) and thrushes can readily be seen around the edges of the forest. California quail are a common sight amongst the more established shrub areas in the forest. Occasionally, little owl, fantails (piwakawaka), plovers and grey warblers (riroriro) can be heard and seen around the forest.

The people of Ngāi Tahu and their ancestors used the Waitikiri wetlands, near what we call Bottle Lake Forest, as an area for gathering eels (tuna) and other fish. Māori also used native coastal plants for medicine, building materials, weaving, footwear, and weapons.

A trial area was also introduced for commercial tree crops and over seven different species of pine were trialed. Remnants of these early tree trials can still be seen, which include poplars, sycamores and macrocarpas. By 1935 all available land had been planted in forest except the swamp and wetlands. The first clear felling started in 1938, removing the trees that had been planted from 1913 to 1915. Today, Christchurch City Council still owns the Bottle Lake Forest land, while the management and operation of the felling are now the responsibility of Raynoier/Matariki Forests who log in a 30 year rotation.In 1909 the Council resumed planting Bottle Lake Forest in an attempt to stop the sand drifting across the wetlands to the fertile soil areas that were used for market gardening.