During this time we heard from 1085 individuals and groups. You can read their feedback below.

The Fendalton-Waimairi-Harewood Community Board meet to hear from submitters and to consider the staff report on Saturday 17 August 2019.

Safety at the intersection of Harewood, Gardiners and Breens roads has concerned local residents for several years. While seeking feedback on our Long Term Plan (2018-28), we received a number of requests for traffic signals at the intersection.

The Harewood Road Corridor Report was developed to look at the effect on Harewood Road of planned works in the first 10 years of the Long Term Plan.

Elected members requested staff develop improvement options for the intersection. We are now seeking your feedback on the two options selected by the elected members.

As requested by Councillors, we have provided details on each of the options, the advantages and disadvantages of each, and impacts on the wider transport network.

In the Long Term Plan, a Major Cycle Route – Wheels to Wings – is planned to connect Papanui and the Airport. Various routes for the cycleway have been considered, with Harewood Road being identified as preferred for directness and connectivity. This project is still subject to future consultation with the community.

Council has allocated $400,000 funding to undertake safety improvements at this intersection. Any option that exceeds this budget would need to be included for consideration as part of the next Long Term Plan and there is no guarantee that this project would be prioritised. It is likely that another existing project would need to be deferred or a rates increase would be needed to provide the additional budget required.

How we assess accident risk

Not all accidents are reported to Police, especially if no one is injured. The analysis tools used take into account this under reporting of accidents.

The Harewood/Gardiners/Breens intersection has had 17 reported accidents between 2008 and 2017. All have been non-injury or minor injury accidents. The accident analysis shows a pattern of similar types of crashes, and the solutions developed for this intersection aim to address these accident types.

The layout of the Harewood/Gardiners/Breens intersection has existing constraints that are affecting safety.

Two options for improving the intersection have been developed: A left in/left out for vehicles, with buses still having the right turn into Gardiners Road, and a pedestrian crossing signal on Harewood Road.

Traffic signals with a pedestrian crossing on each leg of the crossing.

Option 1 (left in/left out with signalised pedestrian crossing) is preferred as it is most likely to reduce accidents, with the least disruption to the wider network and construction can begin immediately with available funding.

To resolve the accidents that are seen occurring at the intersection, closing the median on Harewood Road is preferred. This will make both Gardiners Road and Breens Road a left turn in and left turn out.

Vehicles travelling from Gardiners Road to Breens Road will need to use the U-turn slots already provided on Harewood Road. Pedestrian signals would be installed at the intersection to allow people to safely cross Harewood Road. Vehicles on Harewood Road would be stopped only when pedestrians push the button to cross the road, minimising traffic delays.

A bus-only right-turn slot would remain on Harewood Road to allow buses to turn into Gardiners Road. The bus would activate the pedestrian signal through sensors under the road, to stop oncoming vehicles while the bus turns. The turning slot signals will not activate for other vehicles.

U-turn slots are common on four lane arterial roads to allow traffic to turn into side roads or vehicle entrances.
Examples can be seen on Memorial Avenue and Fendalton Road.

This option has an estimated cost of $400,000 to implement and will likely be eligible for funding subsidy from the Government. 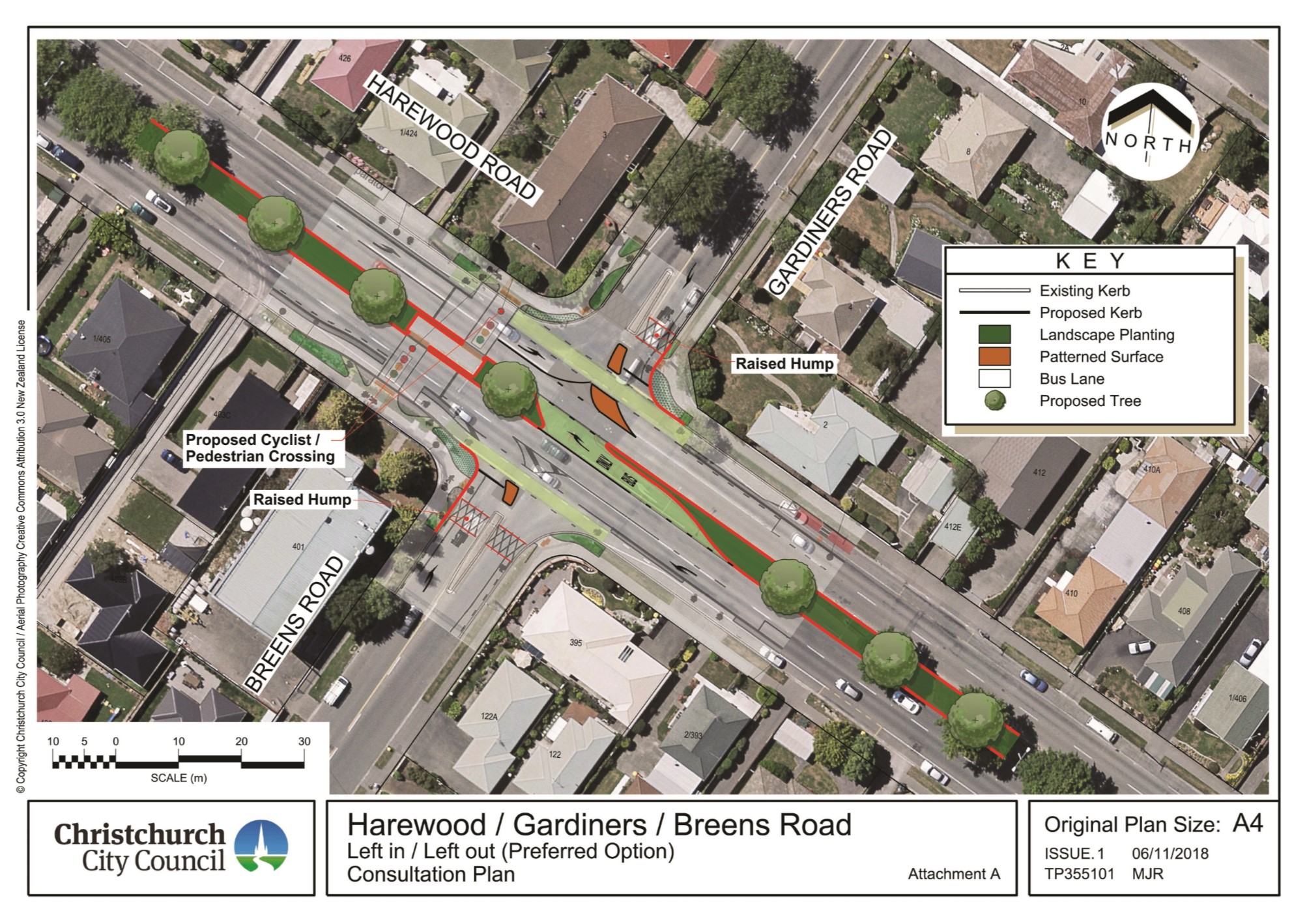 A number of submissions to the Council’s Long Term Plan 2018-28 requested traffic signals at the intersection.

If following future consultation, the Wheels to Wings Major Cycle Route is approved to travel down Harewood Road, a review of this configuration would need to be carried out. The shared left and straight ahead lane will likely need to be changed to a left-turn only lane, leaving only a single straight through lane which would increase traffic delays on Harewood Road.

With Harewood Road being a two-lane road, the right turns will require all other traffic to be delayed, further increasing congestion on Harewood Road.

The predicted cost of installing traffic signals is $1.2 million and would unlikely be eligible for Government subsidies.

There is no funding in the 2018-2028 Long Term Plan for Option 2 at $1.2million, so money would need the agreement of full Council to be put in the budget at the loss of another planned project elsewhere in the city or a rates increase. 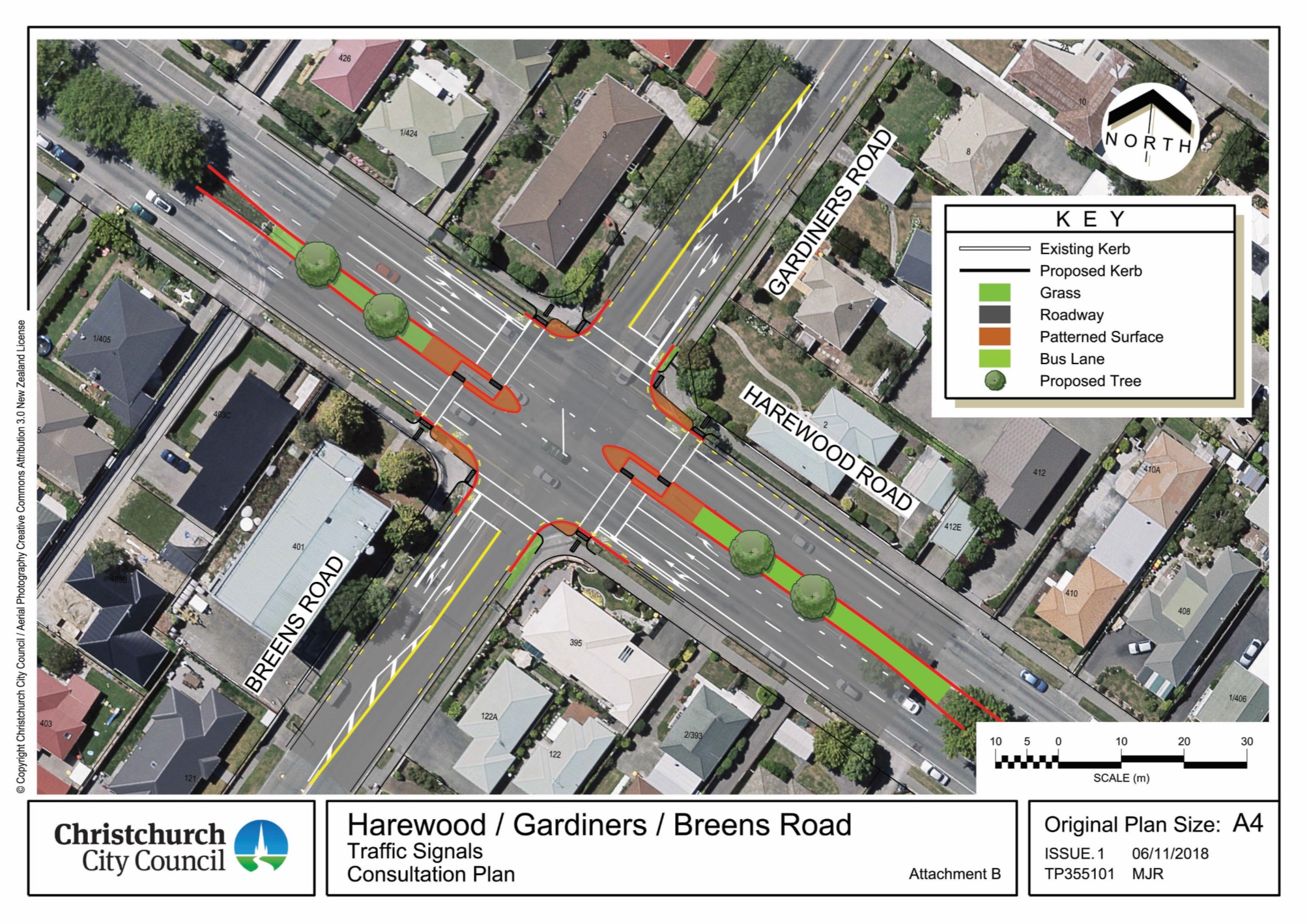 Come talk to us about the proposal