Planting and play feature in the Gloucester-Worcester park landscape plan which includes a pathway linking both streets.

At its meeting yesterday, the City Council approved the name Te Ara a Rongo – Gloucester/Worcester Park for the neighbourhood reserve between Gloucester and Worcester Streets, opposite Christchurch East School.

On 20 February 2019  the Waikura/Linwood-Central-Heathcote Community Board had recommended that the Council approve the name. The Community Board also approved the landscape plan, and requested staff advice on the possible placement of a recycle/rubbish bin, a drinking fountain and the cost of putting lighting along the park's walkway.

More details about the project and the approved landscape plan can be viewed below.

More details about the project and the approved landscape plan

We received 20 submissions on the Gloucester/Worcester Park project during the consultation period from 15 November – 10 December 2018.

Seventeen were in support of the proposed landscape plan for the park at 300, 302, 304 Gloucester Street and 261 Worcester Street. Two submissions did not support the plan and one did not indicate a view. Twelve submissions supported Gloucester Worcester Park as the descriptive name accompanying the gifted name Te Ara a Rongo, but six said that the Maori name should be the only name used.

A staff report will be presented to the Community Board meeting on Wednesday 20 February 2019 at 10am in the Board Room, 180 Smith Street, Linwood.

This is a public meeting and everyone is welcome. You can read the meeting agenda(external link), including the staff report and any additional information, after 5pm on Friday 15 February 2019

The Board’s recommendation on the park’s name is expected to be considered by the Council in April 2019.

The Council purchased four properties damaged by the earthquakes in 2011. We have been working closely with the school and residents to develop a draft landscape plan. Some of you attended a sausage sizzle in March this year to pass on your ideas. Many of these have been included in the plan which is shown overleaf. The park does not currently have a name. We want you to tell us what you think.

Three of the key objectives for the new park are: A 2 metre wide asphalt path winds through the park. This provides enough room for pedestrians and cyclists while not dominating other features such as the trees and play areas 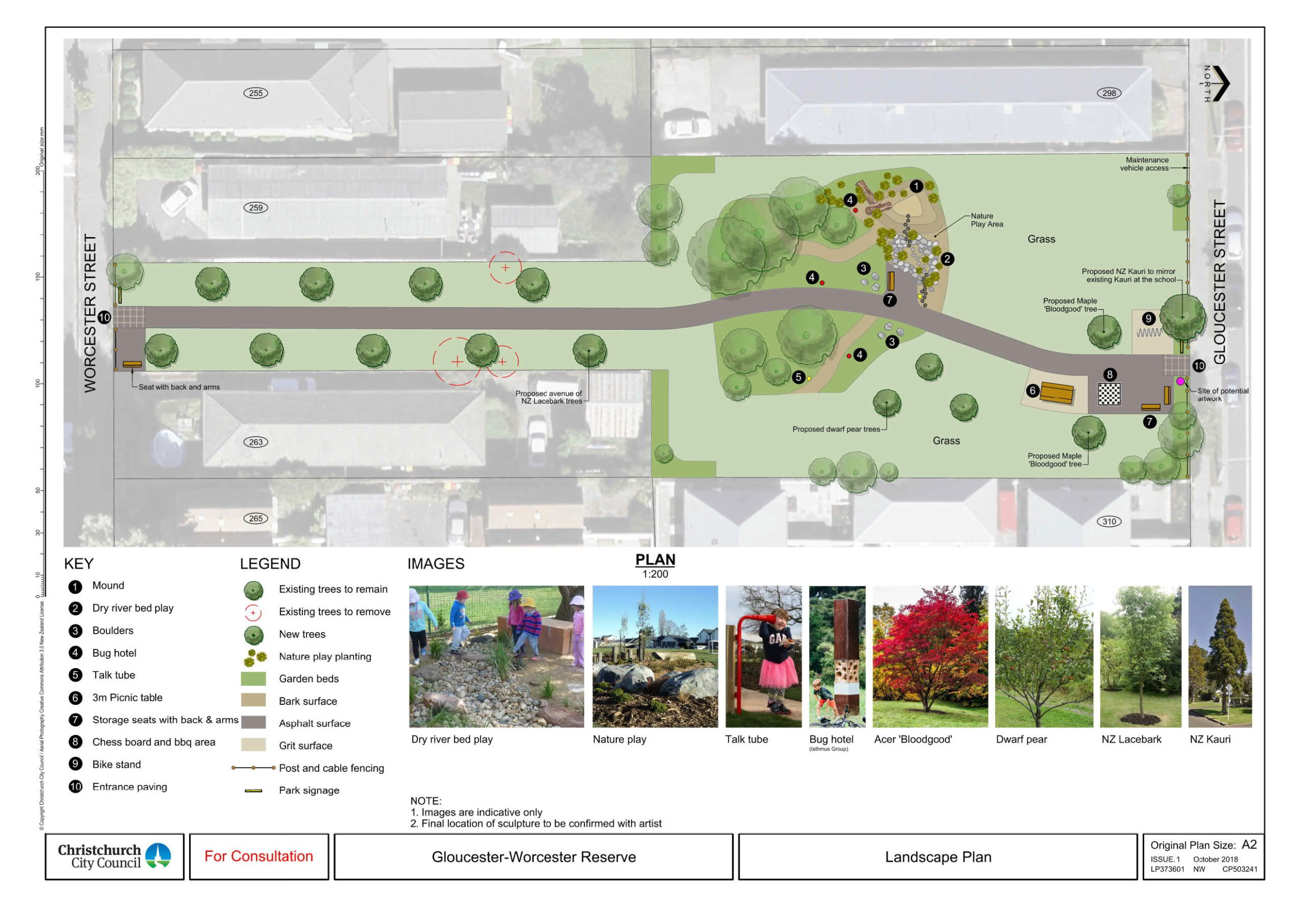 Chess board and barbeque pad

The open green space near the Gloucester Street frontage has been retained for ball games and other recreational uses. Some students at the school enjoy playing chess and a coloured concrete chess board and pieces have been included in the proposed landscape plan. The chess ‘board’ doubles as a barbeque pad.

Chess pieces will be stored in storage seats, with backs and arms, near an accessible picnic table. This corner, with two new deciduous trees to provide shade in summer, can be used by groups, or parents watching children play.  Additional seating is provided near the Worcester Street entrance.

to attract wildlife, a dry river bed and stepping posts are incorporated in the nature play area. Other features are:

An asphalt path ensures some of these features are more accessible.

In the draft landscape plan the pathway near the Worcester Street entrance is flanked with an avenue of native lacebark treesHoheria lyalli,  a 4 metre x 2.5 metre deciduous species small enough to avoid shading neighbours, and attractive to birds. These trees have bright green leaves and cherry-like white flowers in summer.

A proposed kauri tree at the Gloucester Street entrance is intended to mirror an existing tree at the school entrance across the road. Scented bushes and plants are proposed around the nature play area. Some additional fruit trees are intended to complement the existing peach, apple, plum, olive and walnut trees

A safety review has confirmed that lighting should not be used in the park.  At night, there are safer alternative routes available. Lighting can give people a false sense of security.

Art in the park

Students from Christchurch East School are working with an artist to create a mural on the white boundary wall on the eastern side of the park. The mural is not part of this consultation.

An artwork was proposed in early discussions with local residents.  We have a small fund for this purpose and want your ideas on what form this should take and how it could reflect the cultures of the local community.

The new park needs a name.  A resident asked the Council to find a Maori translation for a pathway link.  As a result Ngāi Tahu have gifted the name Te Ara a Rongo.

Ara is defined as a path between two locations (in this case the two streets).

Rongo is the Māori Atua / deity who has a number of names depending on the following:

Rongomātāne - deity of cultivated foods. In this case (and this reserve) would include the fruit trees.

Rongomaraeroa - deity of peace. In this case (and on this reserve) would include a safe space to reflect, and for our children to play and to flourish.

Local residents have also suggested the name Gloucester / Worcester Park because it is simple and describes the location.  This could be a descriptive name that sits with Te Ara a Rongo.

If you would like the Waikura / Linwood-Central-Heathcote Community Board and the Council to consider another descriptive name please include this in your feedback.