A new 10 metre high timber and glass building is planned on the south-western corner of Cathedral Square. We're seeking your comments on a canopy and supports which encroach on legal road (Cathedral Square) from the building's northern facade.

Thirty six responses were received during the consultation period. Submitters were asked to provide comments. Twenty eight (78%) indicated that they supported the proposed encroachment of the building onto legal road within Cathedral Square. Two others (5.5%) gave qualified support and six (16.5%) submitters did not support the proposal.

The staff report recommends approval of the granting of a Deed of Licence to allow the encroachment of the legal road for up to 35 years at a market licence fee. A recommendation requires the owners to prepare a Tree Protection and Management Plan for the three lime trees, and pay extra tree maintenance costs arising from the proposal.

The staff report will be considered at the Infrastructure, Transport and Environment Committee meeting on 10 April 2019 at 1.30pm.

You can read the agenda, staff report and any additional information online at christchurch.infocouncil.biz(external link)  from Friday 5 April 2019.  Minutes will be available online three working days after the meeting.

The Committee’s recommendation is expected to be considered by the Council on 9 May 2019. The Project: A new 10 metre high timber and glass building designed by Shigeru Ban, architect of Christchurch’s Transitional Cathedral, is planned on the south-western corner of Cathedral Square.

Canterbury’s braided rivers and historic trees will be referenced in supporting columns resembling tree trunks and branches, visible inside and outside the glazed exterior. Retail, a café and restaurant/s are proposed on the ground and first floors of the new building.

Site owner Redson Corporation Holdings Ltd is seeking Council approval for the building’s canopy, seven timber columns and their foundations encroaching on legal road along the northern façade of the proposed building. This site is held by the Council as legal road and forms part of the public open space in the Square, which is scheduled as a ‘Highly Significant’ heritage space in the District Plan.

The proposed building also includes canopies along the Hereford Street and Strand Lane frontages. These comply with the Christchurch District Plan and are therefore not part of this application.

The 9 Cathedral Square site is located on a key central city site on the south western corner of the Square, and is bordered by the Square (north), Strand Lane (west), Hereford Street (south) and Colombo Street (east).

The site was formerly occupied by the ANZ Bank Building which was demolished in 2013. A resource consent application for the ‘Braided Rivers’ building was submitted by the owner in May 2018 and approved in June 2018. 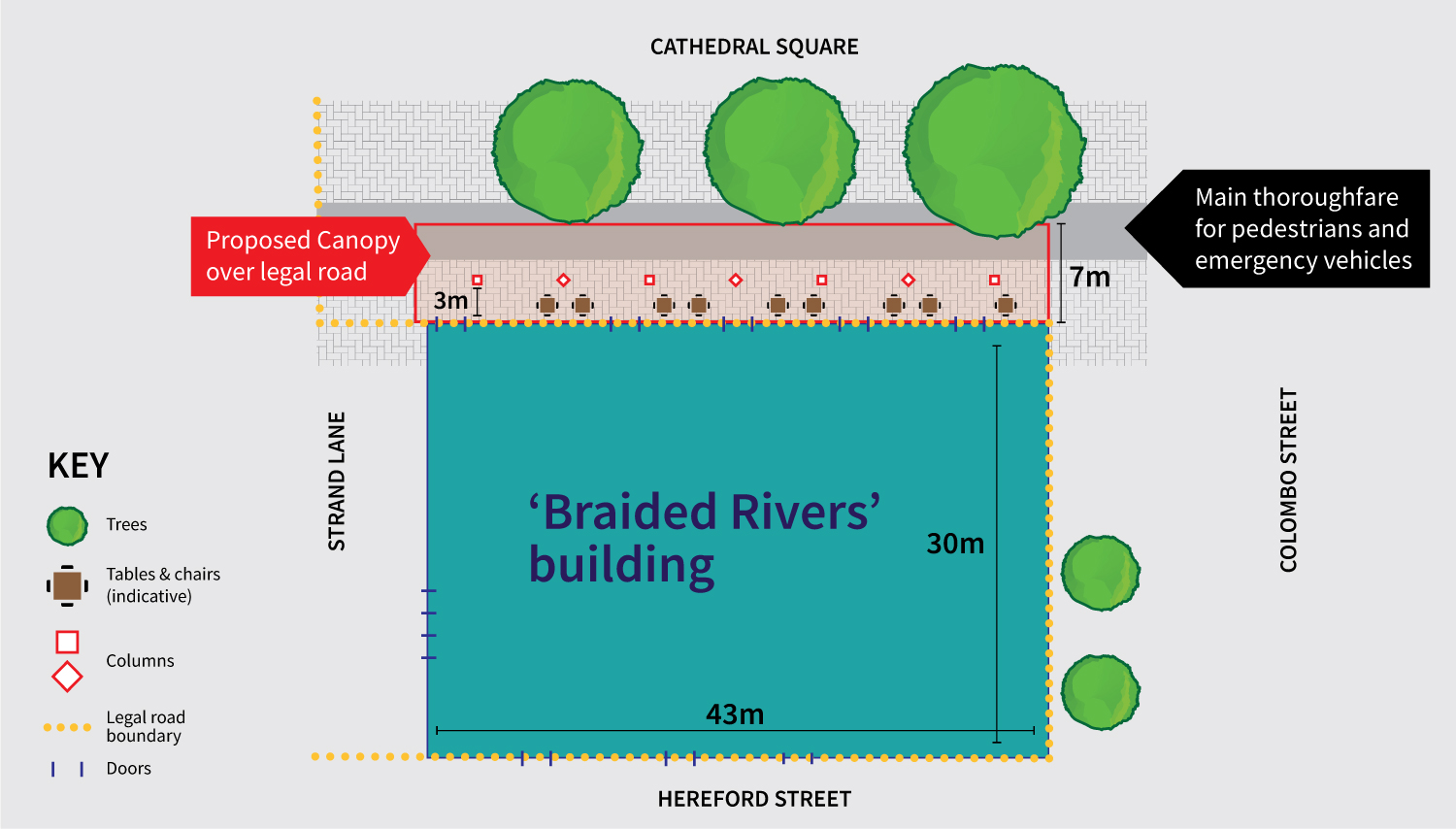 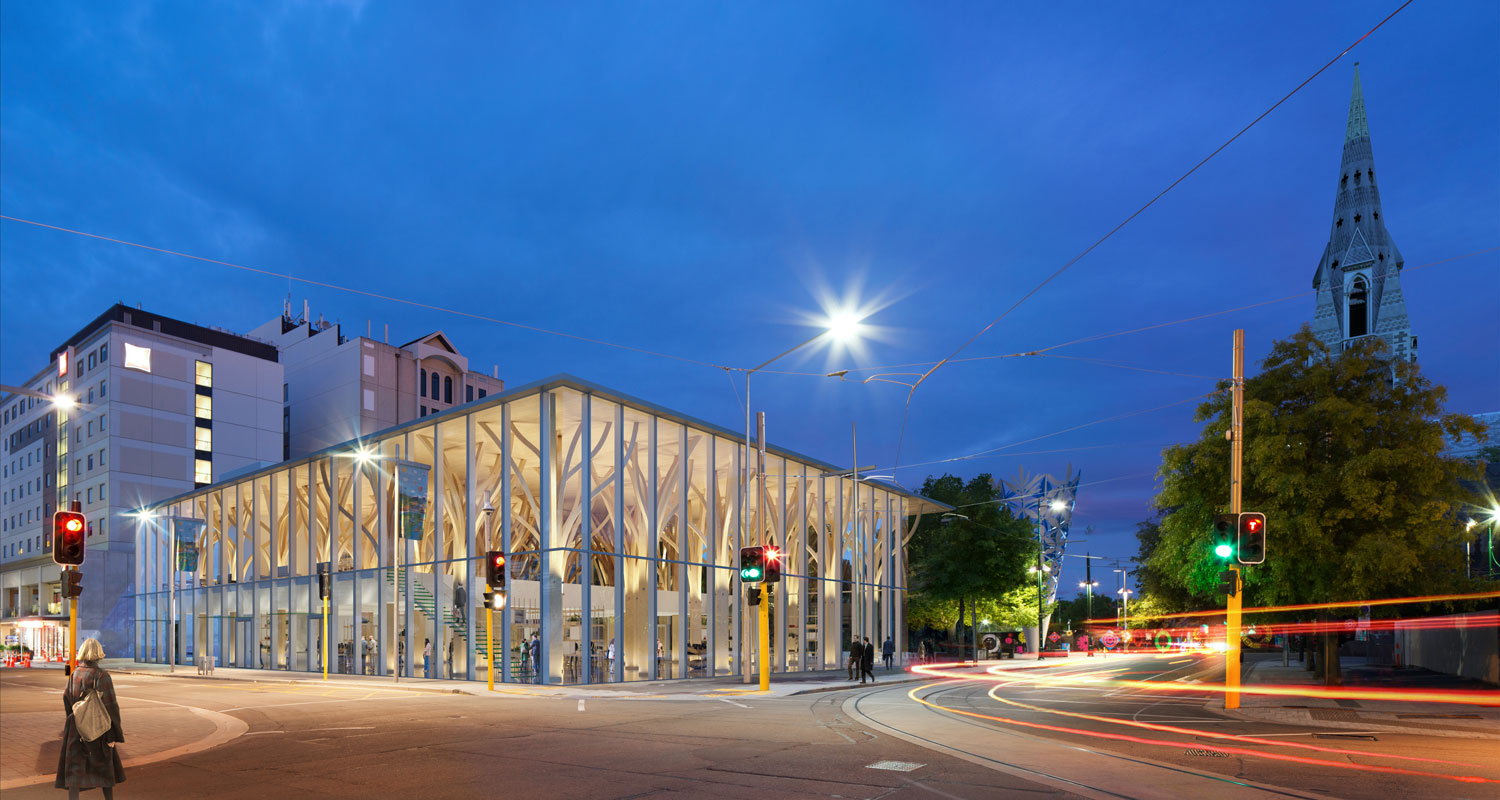 Approval is being sought for a northern façade canopy extending 7 metres over the legal road in Cathedral Square along the entire length of the site. The canopy will be 10 metres high and supported by seven timber columns which require foundations encroaching into the road’s subsoil (see 9 Cathedral Square Canopy Plan).

The Council needs to decide whether or not to grant approval for the erection of these structures over and on the Counci’s legal road. Approval would take the form of a ‘Deed of Licence’ which would allow the occupation of the legal road at 9 Cathedral Square.

If approved, the Deed of Licence would be issued to allow the encroachment of the legal road for a period up to 35 years.

This application is inconsistent with the Policy in the following respects:

Despite these inconsistencies with the Policy, the Council is able to depart from the Policy and grant the application if appropriate using the procedure in section 80 of the Local Government Act 2002.

Why consult on the encroachment of the building on legal road when the building already has a resource consent?

While a resource consent has been issued for the proposed building, this does not have the effect of authorising the proposed encroachment of the building over the legal road. This requires a separate decision from the Council as owner of the legal road. Public consultation is required to meet the Council's legal obligation under the Local Government Act to consider the views and preferences of interested or affected persons. The status of these trees has been assessed by a Council arborist who states that:

“The trees will require clearance pruning for the proposed verandah during construction, and for ongoing maintenance and use of the site.”

The arborist reports that these trees are not fully grown and could develop to twice their current size. They have also the issues of autumnal leaf litter and the possibility other tree debris falling onto the canopy or patrons of the café. The arborist recommends that:

“The potential adverse effects on the development of the trees (and potential loss of contribution to the amenity of the site) and the potential increase in costs of tree maintenance have not been quantified, but should be assessed as part of the application.”

These trees are considered as part of the heritage fabric of Cathedral Square and there is no indication they are unhealthy.

The trees also provide a valuable area of shade and shelter for users of the Square.

The applicant will be responsible for additional tree maintenance costs.

Cathedral Square is designated as a Highly Significant heritage Item and Heritage Setting in the Christchurch District Plan.

The Council's Urban Design Panel generally welcomes the design of the landmark project. It supports the proposed changes in Cathedral Square, provided this area remains in the public realm and public access is not impeded. The panel says the building should retain the Square’s historic (cruciform) shape by emphasising the edge through the use of paving and threshold treatments.

Advantages of using public space for the building

Disadvantages of using public space for the building