Earthquake damage to land and infrastructure alongside the Heathcote River has led to increased severity of flooding.

A series of stormwater basins in construction in the upper Heathcote are helping to reduce flood risk, improve water quality and provide new public recreational spaces.

A series of stormwater basins in construction in the upper Heathcote are helping to reduce flood risk, improve water quality and provide new public recreational spaces.

Changes caused by the earthquakes have increased flood risk along the Heathcote River. One of the key ways we can reduce flood risk is to store water during the peak of storm events, and slowly release the stored water after water levels downstream have dropped. This results in a lower peak river level, and reduces the risk of flooding for homes in the upper and mid Heathcote which have an increased risk of flooding as the result of the earthquakes.

The flood management basins are combined with treatment wetlands to help improve water quality by treating stormwater runoff and sediments. The wetlands are also providing recreational areas with walkways and cycleways, grassland, wetland and forest habitats.

To best manage the risk of river flooding and to optimise the benefits provided by the basins we’re installing automatic control gates to capture and release of flood flows from the four basins. Radio communications will also be provided to connect the system back to the control room at the Christchurch Sewage Treatment Plant.

A project has been developed to cover the development of the overall system logic, detailed design, tendering and construction of the system (communication, controls and instrumentation) that will integrate the four individual basin control systems in the Upper Heathcote River catchment and to minimise downstream flood levels for the design rainfall event(s).

The Curletts Stormwater Basin at 201 Annex Road has been constructed. Capable of holding up to 130,000m3 of water, it is designed to provide additional flood protection up to a 1-in-50 year rainfall event. It will also treat water within Curletts Stream to remove sediment and contaminants, to improve water quality in the stream and the Opawaho/Heathcote River.

The basin is being planted with wetland plants and the surrounding areas planted extensively with native trees and shrubs. The area will be accessible to the public from Mokihi Gardens and Annex Road, providing a lovely new space for walking.

Wigram East Basin in Canterbury Agricultural Park has seen the lowering of a large area of the park for flood storage, and created four hectares of wetland. In a one-in-100 storm event, the basin can now store around 590 million litres of water, the equivalent of 236 Olympic-sized swimming pools, which means less risk of properties along the upper reaches of the Heathcote flooding.

The new wetland area will provide a habitat for a number of threatened species and will also help to clean the water as it leaves the basin and flows into the Heathcote.

The Council fast-tracked the $7.25M project to extend the Wigram East storage basin to provide critical flood mitigation, and scheduled it at the same time as work on neighbouring Ngā Puna Wai Sports Hub. By doing the two projects in tandem, the Council was able to use the material excavated for the basin to help build the sports hub, saving millions of dollars and greatly reducing the need for material to be trucked away through neighbouring residential streets.

As part of the flood protection work an extra kilometre of walking track has been added to the park.

During large flood events the Eastman Wetlands Basin control gates will hold back more than 150,000 m3 of stormwater from flowing down Cashmere Stream and into the Heathcote River, helping to reduce flooding downstream. In addition the wetlands within the basin will provide treatment to the stormwater run-off from the surrounding urban developments during normal rain events.

The overall masterplan for the wetlands includes significant planting of native species and improvement to the local waterways through naturalisation and riparian planting. A number of public access tracks will also be built to allow the public to enjoy the scenery.

Construction of the Eastman Wetlands Basins is being done in stages. Stage 1, which includes two smaller flood storage basins beside Sparks Road was completed in 2016. Construction of the main Eastman Wetland Bund and naturalisation of Milns Stream began in 2019 and will be completed in the first half of 2020. The remaining structures and earthworks will be constructed from 2020 – 2022 as ground conditions and funding allow.

The Sutherlands Storm Water Treatment Basins are being constructed on land south of Cashmere Stream between Cashmere Road and Sutherlands Road. These basins provide storm water treatment for run-off from the local urban developments as well as holding back stormwater in large rain events.

The large basin on the east of the site is designed to channel the significant storm water flows from Hoon Hay Valley into the adjacent Eastman Wetland Basin in a large flood event helping to reduce the flow down Cashmere Stream and into the Heathcote River. In addition, during low flows this basin will help remove sediment from the Hoon Hay Valley Drain flows before they discharge into Cashmere Stream via the Eastman Wetland basin.

Construction of the Sutherlands Storm Water Treatment Basins is scheduled to be completed in 2020 with further landscaping being completed the following year.

The Cashmere and Worsleys Valleys have been identified as good places for a basin that will reduce flood risk to properties around the lower and mid Ōpāwaho/Heathcote and improve water quality in Cashmere Stream and the Ōpāwaho/Heathcote River.

The first stage of the project (currently in construction) is a structure in Cashmere Valley Drain, close to Worsleys Road, which can be shut to store water in the lower part of the valley. It is planned to be up and running by December 2019. This will allow the lower valley to hold up to 500,000m3 of water, and is designed to provide additional flood protection up to a 1-in-50 year rainfall event. The valley has also been contoured to allow as much sediment as possible to settle out prior to water leaving the valley. This will improve water quality in Cashmere Stream and the Ōpāwaho/Heathcote River.

Dredging work on the lower Ōpāwaho/Heathcote River in 2018 to help lower the risk of flooding in the area.

Dredging work began on the lower Ōpāwaho/Heathcote River in 2018 to help lower the risk of flooding in the area.

The dredging helps to restore river capacity lost after the earthquakes through removing silt deposits. The dredging has also removed contaminated sediment which has entered the river from commercial and street stormwater runoff, which has improved the in-stream habitat in the river. This complements benefits from the new stormwater filter at nearby Richardson Terrace.

The dredging has been done between Radley Street and the Woolston Cut, and between Opawa Road and Radley Street. Later in 2019, work will begin on the next stages upstream of Opawa Road. Following dredging, planting is done along the river banks.

Bank stabilisation work is to counteract erosion and slumping which has reduced river capacity.

Some sections of the bank along the Heathcote River suffered damage from the 2010/11 Earthquakes. Erosion and slumping reduced the river capacity, and increases the impact of frequent flooding. It also increases risk to adjacent roads and other infrastructure.

The Council undertook significant bank stabilisation works, increasing the waterway area by widening the channel wherever possible. A ‘naturalised’ bank profile has been formed, rather than hard engineering structures.

The river will undoubtedly find new unstable sections of bank to erode and the completed works won't stop this, but they will reduce the amount of reactive repairs required. We also now have good working knowledge of construction methods which will help with future bank stabilisation work.

The Flood Intervention Policy helps property owners who've had frequent above-floor flooding, where their flooding has been worsened by the earthquakes, and planned flood mitigation schemes will not offer a timely reduction to their flood risk.

In 2015, the Council introduced the Flood Intervention Policy, to help property owners who've had frequent above-floor flooding, where their flooding has been worsened by the earthquakes, and planned flood mitigation schemes will not offer a timely reduction to their flood risk.

The Council works with these property owners to determine the most appropriate, cost-effective option for their property, which might be reducing their flood risk through localised drainage works or house raising, or the Council may offer to purchase the property. Purchase offers are voluntary.

The Policy has been applied in Flockton and along the Heathcote River. In other high priority flood risk areas, once the Council’s Land Drainage Recovery Programme has completed flood risk investigations, if there are still properties at high risk that won't benefit from timely area-wide mitigation, the Council will offer the same assistance to these property owners. 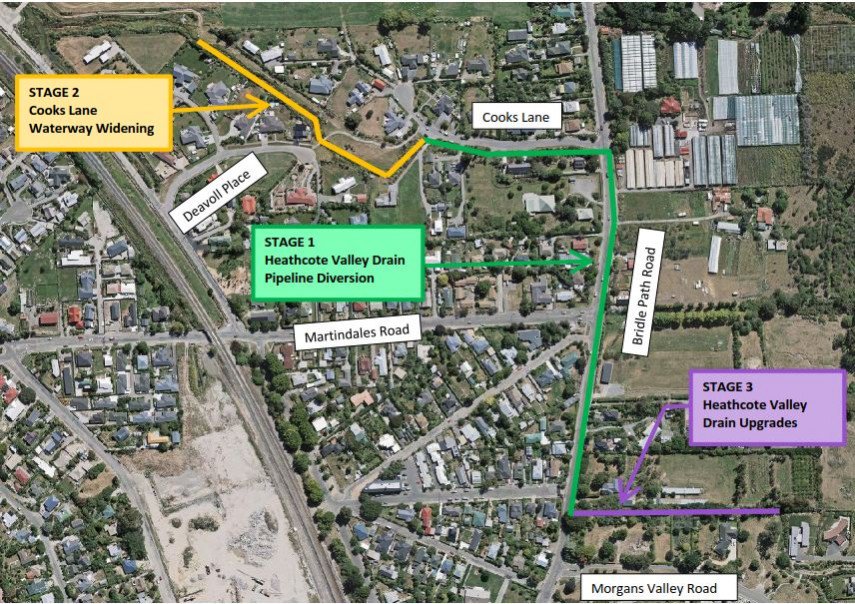 The Bells Creek flood mitigation works have reduced above floor flood risk for 32 properties, improved the quality of water going into the Ōpāwaho /Heathcote River and brought new community recreational spaces. The $19M scheme, completed in May 2019, includes:

Subscribe to updates on flood mitigation in the Heathcote River area.