We have made transport improvements in St Albans, Edgeware and Mairehau aimed at managing the expected traffic when the Christchurch Northern Corridor opens and improving connections for pedestrians and cyclists in the area.

The Christchurch Northern Corridor (CNC) is open and helping people travel to and from the north of Christchurch by extending the Northern Motorway to QEII Drive and Cranford Street.

Further information about this project is available on the NZ Transport Agency website(external link).

We have completed the bulk of the road works downstream from the Christchurch Northern Corridor in St Albans, Edgeware and Mairehau but we are continuing to monitor vehicle numbers travelling through. We will also be trialling some changes in the new year to help minimise short cutting through local streets.

We would like your help to let us know about any traffic issues in your neighbourhood.

We want to hear about:

If you have any issues please contact us at transport@ccc.govt.nz.

The bus lanes will operate:

The trial period is for three months. During this time we will be collecting information to help make a decision whether the bus lanes should become permanent.

We are continuing to engage with residents about traffic calming on local streets.

We have identified two streets, Francis Avenue and Thames Street, where the traffic conditions have become an issue and we are putting trial measures in place to reduce the impacts on the residents. Feedback on traffic calming options last year has informed the traffic calming trial options -  left-in left-out only turning restrictions and a cul-de-sac.

Following the trial periods, we will consult on the preferred options.  We will then develop permanent options based on that feedback.

We were planning turning restriction trials on Weston Road, Knowles Street and Mcfaddens Road, however, we are now waiting to gather more information on the traffic impacts on these streets.

We are talking to residents of specific streets identified for traffic calming. It is likely that we will monitor a number of streets once the northern motorway opens but this work will allow us to act quickly if traffic issues arise.

Consultation on the projects took place in July and August 2019 and more than 50 changes have been made in response to feedback.

The street meetings we had planned for March/April 2020 about future traffic calming options/ideas for your street have been postponed.

Cranford Street will be reconfigured between Berwick Street and Innes Road.

We are working with our partner organisations to mitigate the expected increase in traffic on Cranford Street and other streets in a way that:

This stretch of road has been widened slightly to allow for an extra lane.

The Waipapa/Papanui-Innes Community Board have recommended that Council retain the existing road layout on Cranford Street between Innes Road and Berwick Street. Parking would be retained and the additional street space would provide more room for cyclists using this stretch of Cranford Street.

The recommendation would allow the space to be used for parking while Council staff monitor vehicle numbers once the Christchurch Northern Corridor opens.

The Community Board noted their preference that if the extra lane is used in the future that it be used to promote mode shift to car pooling and buses.

The Board's recommendation will now go to Council for a final decision.

Many intersections in the area have been changed, particularly on Cranford, Sherborne and Warrington streets 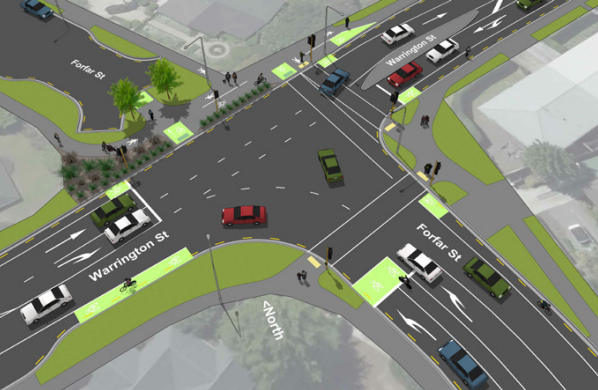 The following changes have been made to the intersections in the area:

The safer speed zone is now in place with signs installed in February.

A 40km/h slow speed zone has been introduced from just north of Innes Road through to Bealey Avenue.

Rutland Street/Springfield Road is the western boundary for the slow speed zone, which stretches through to Hills Road in the east.

An area around the Edgeware shops is 30km/h. 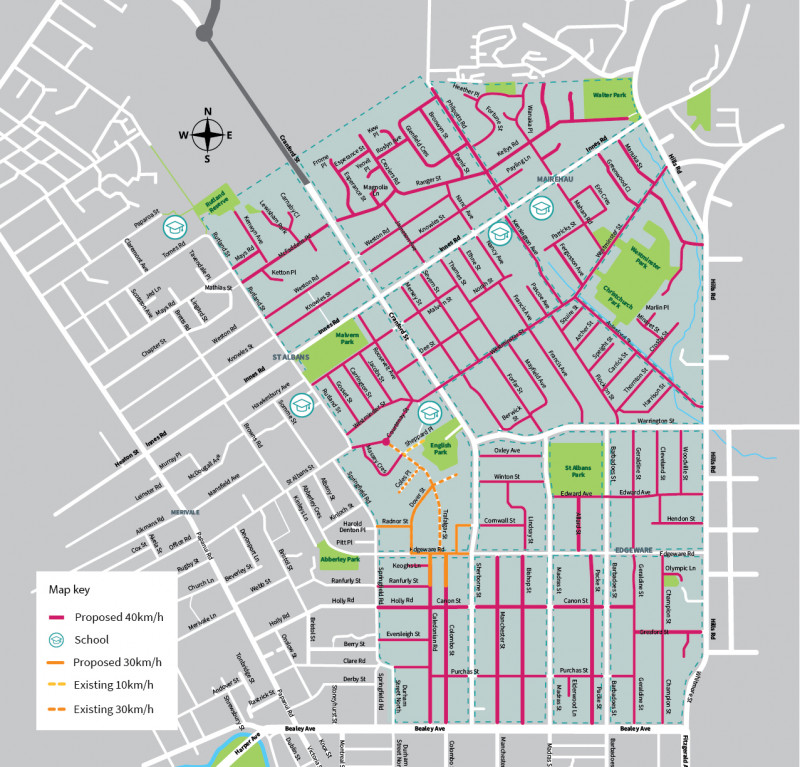 Cycle routes have been built to improve connections through the neighbourhood.

The Christchurch Northern Corridor has a shared path for pedestrians and cyclists running alongside it. A connection has also been built between this path and the Papanui Parallel.

It runs next to Cranford Street before turning west and linking with the Papanui Parallel at Rutland Reserve.

The on-road cycle routes have been built to offer east-west connections to the Papanui Parallel cycleway, as well as alternative north-south routes to connect to Madras Street and Barbadoes Street.

You can see how these fit together in the map below. 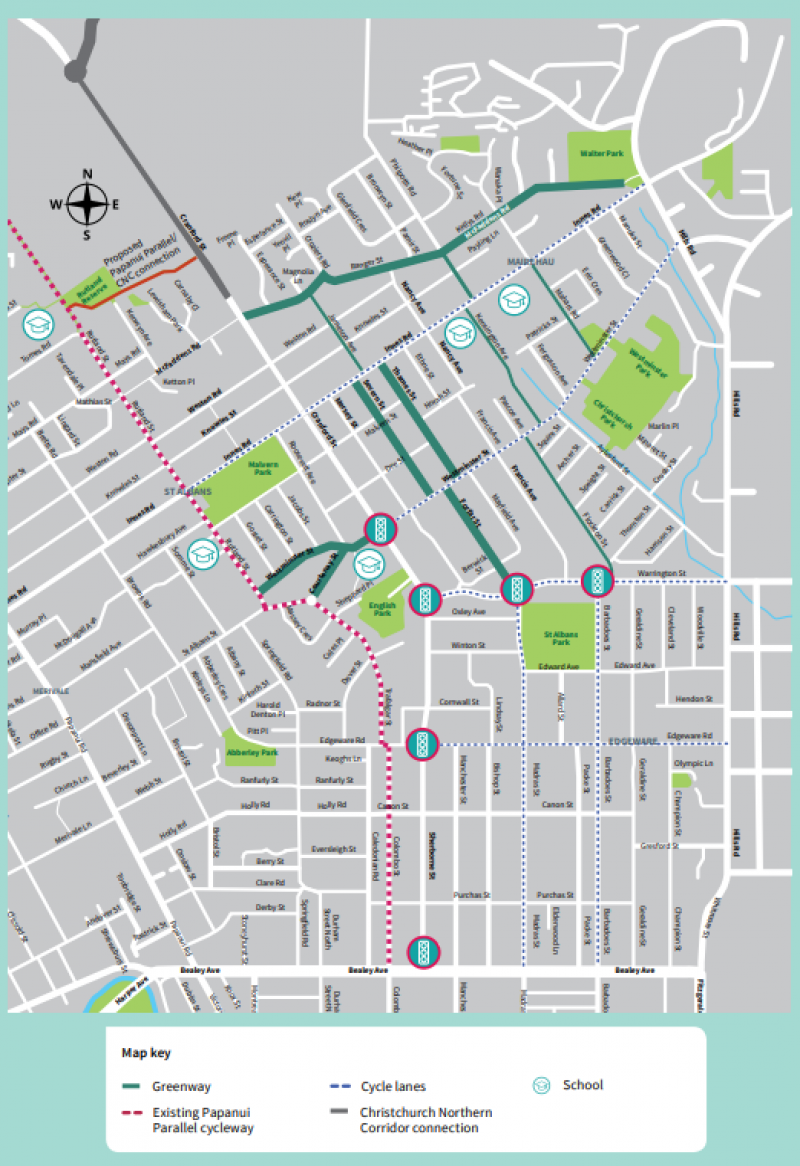 What else is happening

We are working with our partners on a package of projects that sit alongside the Christchurch Northern Corridor.

We are working with our partners NZ Transport Agency, Waimakariri District Council and Environment Canterbury (ECan), on a package of projects that sit alongside the Christchurch Northern Corridor.

The NZ Transport Agency will install a lane for vehicles with more than one person in them on State Highway One and the new Christchurch Northern Corridor motorway to encourage carpooling. This lane ends just before the Cranford Street roundabout.

The Waimakariri District Council and NZ Transport Agency have agreed to co-fund park-and-ride facilities in the district to encourage carpooling.

ECan has agreed to provide direct bus services from Christchurch north that will travel along the Christchurch Northern Corridor and Cranford Street. These services start in early 2021.

We are collecting air quality and noise monitoring data so we can compare data from before and after the opening of the Christchurch Northern Corridor.

The environmental monitoring sites have been chosen by independent experts.